The project took a long time to ‘take off’, but the end result is exceptional and the basic concept could be easily copied or adapted for use in the UK.

A group of ten families initially came together in 2007-8 to explore if they could build themselves a collective housing development. They all had a connection with an existing community organisation in Potsdam that provides temporary accommodation for migrants, a range of educational facilities and some shared workspaces. In front of the community organisation’s facilities (a former factory owner’s Villa) there was a wooded area that was identified as possible location for the new housing project. 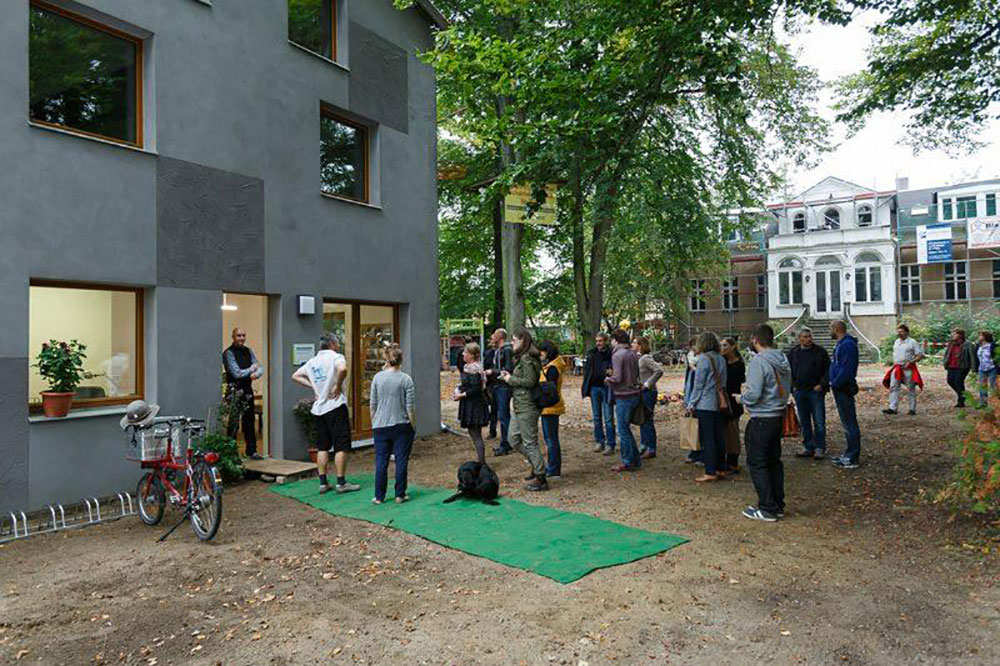 The group was ecologically conscious so it wanted the homes to be built to Passive House standards. The group also wanted to provide homes for rent, rather than for sale, and to make units available to people on modest incomes or those in housing need.

The development consists of a simple very well-insulated cube, with accommodation arranged over three levels. The interior is split into seven individual apartments, each custom-designed to match the requirements of the households. An innovative heating system provides warmth and hot water for all the homes in an extremely cost effective way.

Construction began on site in 2013, and the residents moved in towards the end of 2014.

The new building sits in front of the community organisation’s main facilities. It has a footprint of approximately 12m x 19m

This simple, relatively low-cost building provides seven apartments. The project is built to Passive House standards and cost about £600,000 to construct. The apartments are rented at £5.50 per sq m per month (plus about 80p per sq m per month for all utility costs). This income will repay the loan that was taken out to fund the construction and it will then be used to fund similar developments. 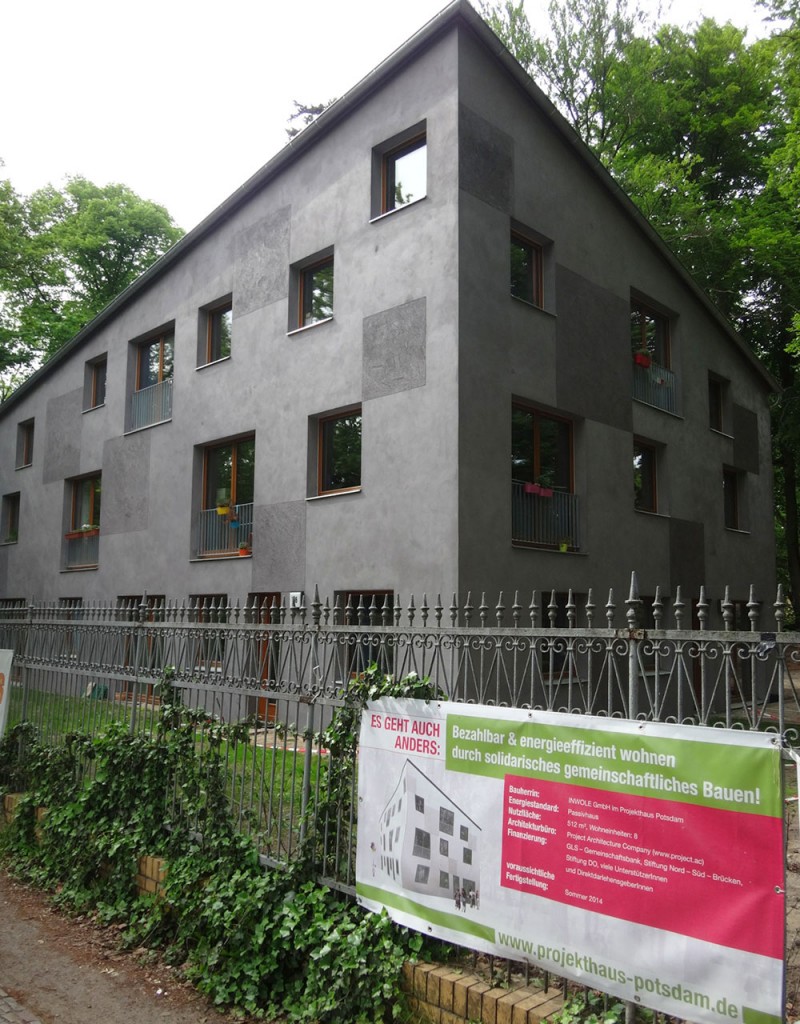 Three floors of accommodation are provided. The ground floor apartments all open directly into the garden area. An external rear stairway provides access to the upper levels

The building is located in front of the existing community organisation’s premises at Rudolf-Breitscheid-Straße 164, Potsdam 14482. The site is about three miles east of the centre of Potsdam in a largely residential area called Potsdam-Babelsberg.

Potsdam itself in a very attractive town and is within comfortable commuting distance to Berlin.

The building is essentially a very well insulated, cube-shaped structure arranged over three levels. It provides 510 sq m of internal accommodation set out across seven apartments, and it also includes a small office space/guest apartment.

It was designed to echo the massing of the existing Villa, and its location has created a new courtyard garden area between the two structures. It was also shoe-horned in between several mature trees on the land in front of the Villa.

The design is simple and cost effective. The use of different sized windows and two render treatments breaks up the wall elevations playfully. The saddle roof also adds architectural interest.

Architect’s visualization of the project 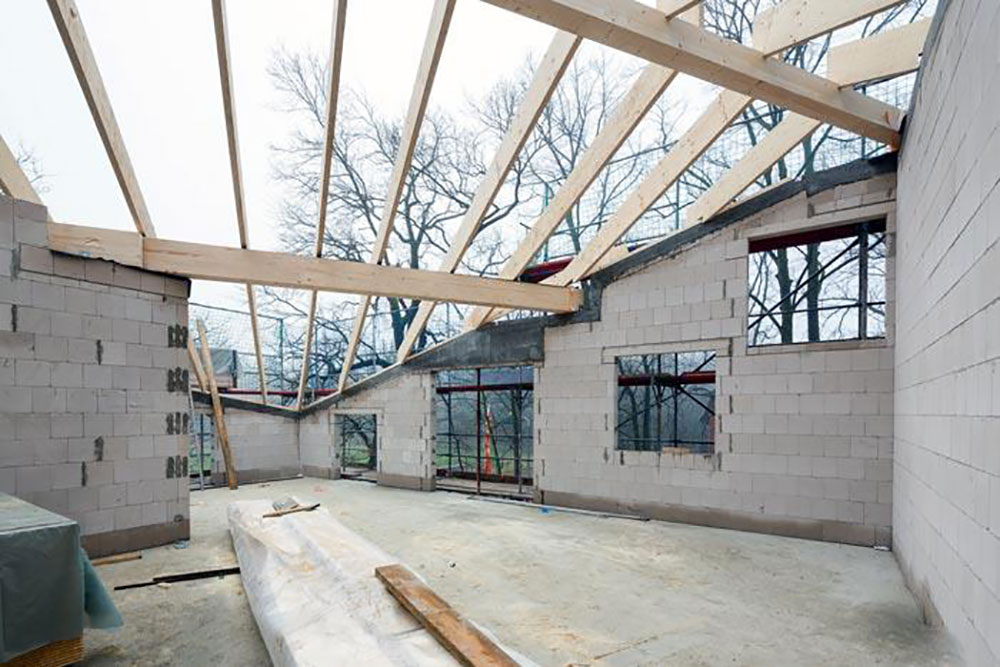 The average U-value of the envelope is 0.12 W per sq m deg K. There is 300mm of external insulation in the masonry walls, and the roof has 360 mm of mineral wool
Windows are triple glazed and a lot of work went into minimizing thermal bridging and attention to detail to ensure air tightness. A central mechanical ventilation and heat recovery system is used to provide most of the heating for the homes.

Hot water comes from a wood pellet boiler in the neighbouring community building, and there are some solar thermal panels on the roof.

An architect who was one of the original group members drove the construction and project management of the building. He did not design the building – this contract was awarded to The Project Architecture Company (www.project.ac/)

It took about five years for the project to get from the inception stage, to detailed design and planning. There were many meetings, and this presented challenges for some of the families, especially those with younger children.

When we visited in early 2015 the homes had been occupied for several months and most of the work was complete, through there was still some final decorating and landscaping needed. 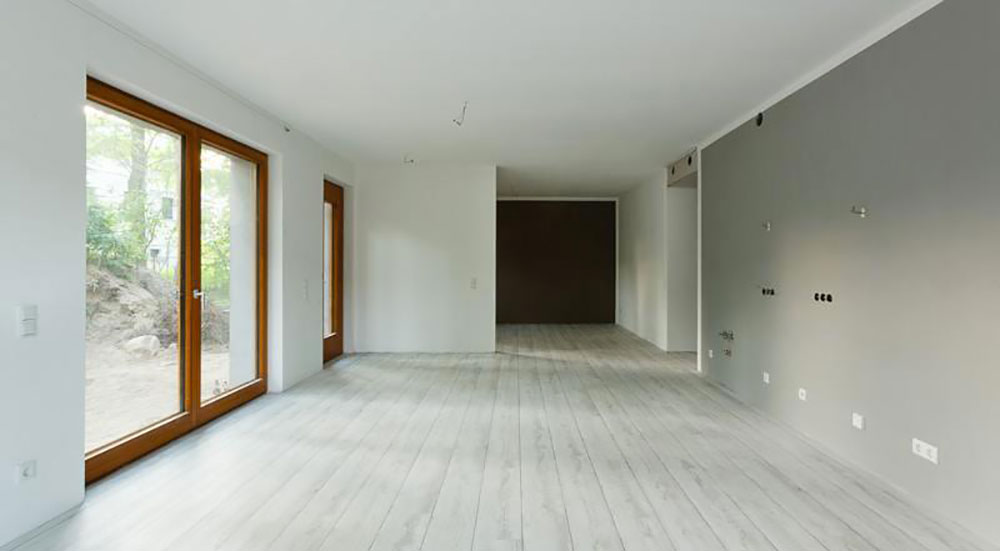 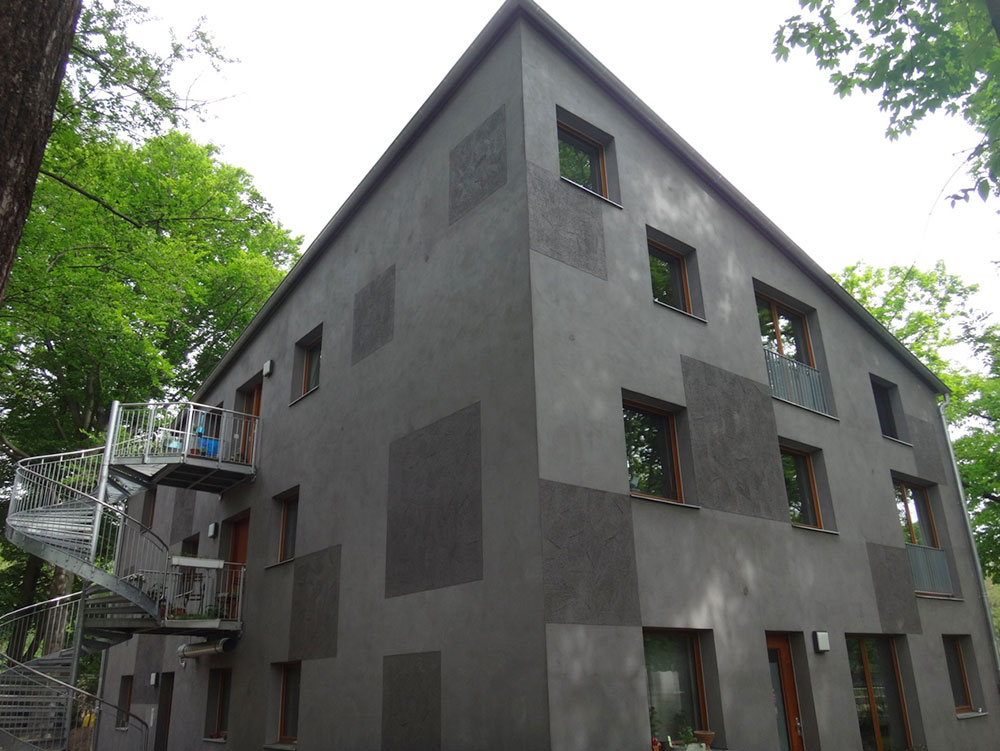 The external spiral staircase provides access to the upper floors, where two or three apartments are accessed from a small hallway 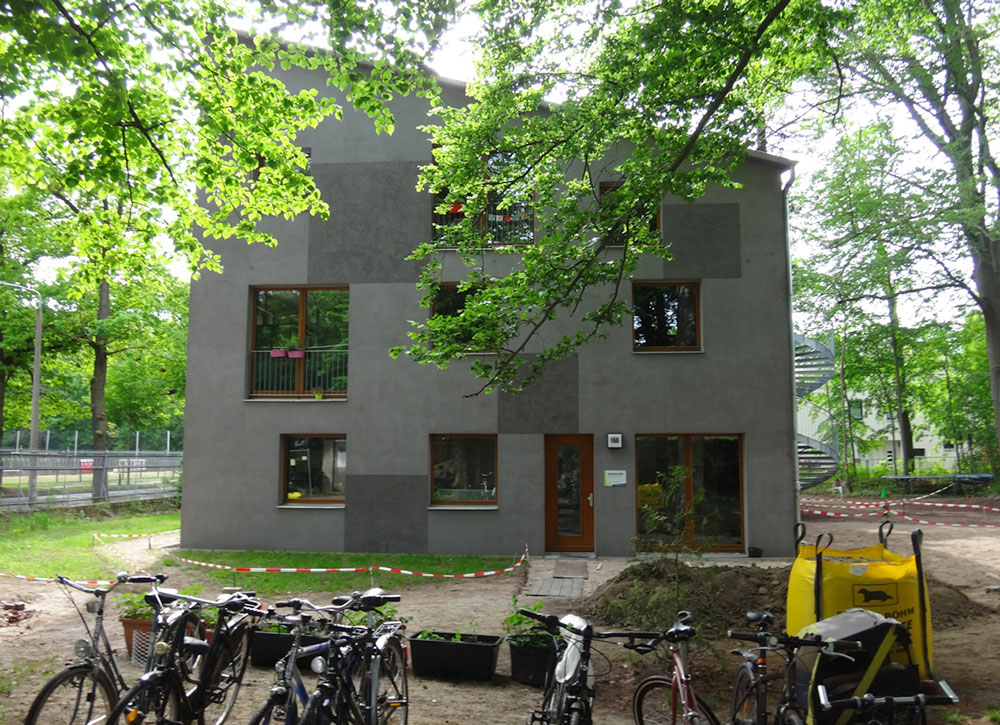 The design of the block is simple, and therefore very cost effective. All the early thinking and effort that went into the specification of the Passive House features has paid off. New technological solutions are challenging and can take time to ‘fine tune’ so they operate exactly as they are supposed to.

The history of the group goes back to 1993, when people in the north east of Brandenburg came together to organise various meetings and anti-racist events. The idea of building the ‘Projekthaus’ was first discussed in 1997.

In 2004 the group was legally constituted and in 2005 it acquired an empty Villa and workshop-space from the local council, and it then spent the next two years reconstructing/remodelling it.

In 2007/8 some members of the main group then began to work out how they might be able to build homes for rent on the land in front of the Villa.

Planning permission for this was granted in early 2013 and construction began in August 2013. The residents finally moved in in September 2014.

Groups can take time to form

Groups can take years coalesce, and the hunt for a suitable site can take years. This can lead to some members falling by the wayside

A small part of this land (less than 300 sq m) was donated for the Projekthaus development. Currently similar land is valued locally at around €230 per sq m.

There was a lot of initial interest in the project, but because of the long time it took to get from an idea to a planning application – about five years – some of the original families dropped out.

The group was keen to help those in housing need. In the end seven apartments were provided, ranging in size from 45 sq m (one person) to 93 sq m (four person). There is also a small office/guest apartment (30 sq m) that one of the original team now operates from (he advises other groups on similar projects).

A total of 35 people now live there – mainly younger families. 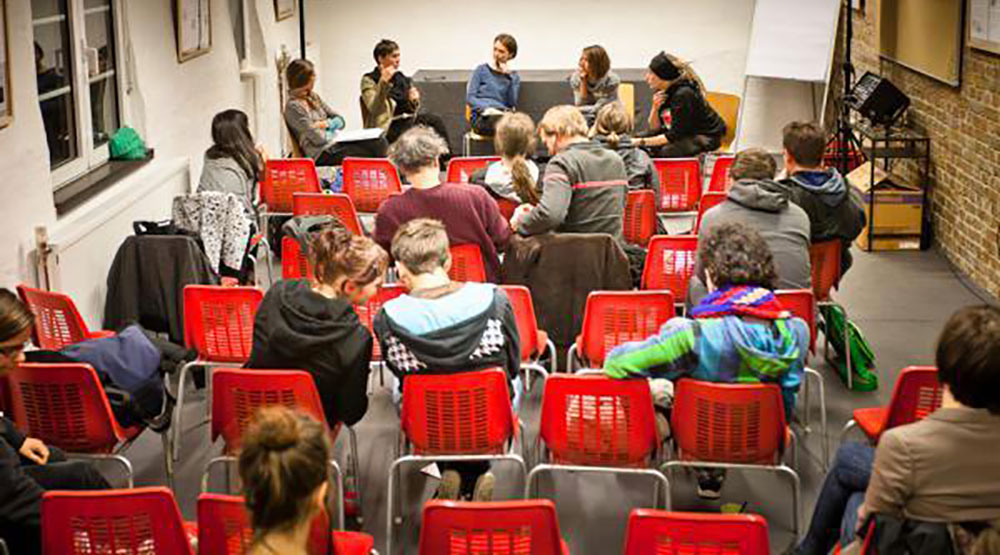 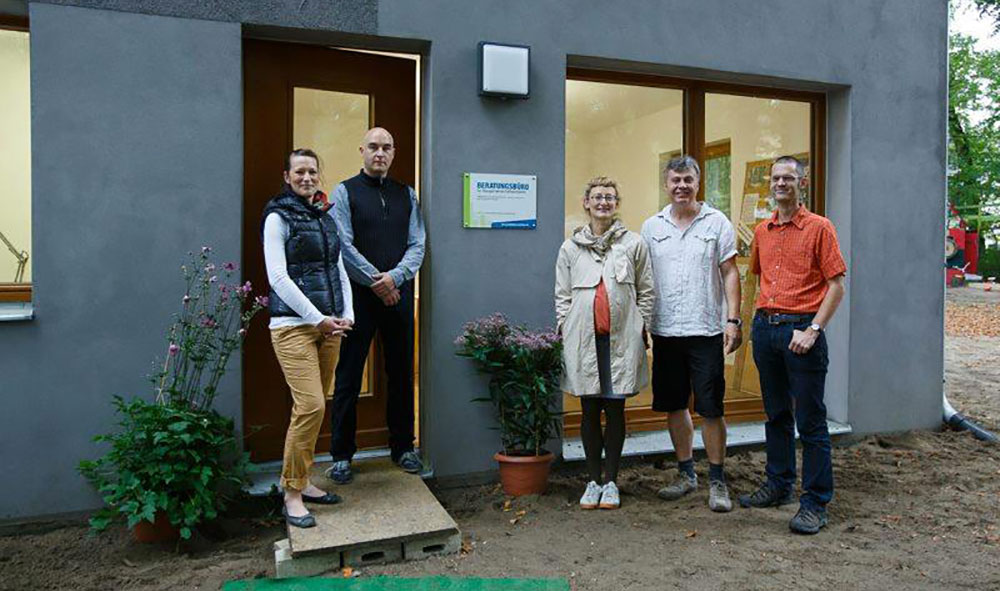 Some of the core group members outside the completed building

Expert help can speed up the process

The amount of time needed to attend meetings and to participate and help manage a construction project on this scale should not be under-estimated. It is helpful to have someone in the group who understands buildings and the construction process

The construction of the block cost €850,000, including all fees and other expenses. The land was donated by the community organisation that is housed in the Villa on the site.

Because of the Passive House specification the project was eligible for very low interest rate loans of €50,000 for each apartment from the KfW Bank. This generated €350,000 of the finance that was required, and a top-up loan was secured from the GLS Bank. Both these lending institutions are supportive of collective projects like this.

Compared to social rents this is a little higher (roughly £5.50 per sq m/month compared to £3.50 to £5 for typical social housing properties), but the specification is much higher. The £5.50 figure is well below equivalent market rents  (currently £8.50 to £10.50 per sq m per month).

The residents also all pay a very small amount (about 7p per sq m per year) to an organisation called the Mietshäuser Syndikat (or “Syndicate for Rented Houses” – see www.syndikat.org/en/membership/). The Syndikat  is a network of about 100 similar projects that support each other and assist new projects to form. The Syndikat supported the group in the early development stages by providing copies of the standard documents they would need, and it also helped introduce the group to lenders.

No real marketing was involved. The group came together because they all knew each other and were involved in the community organisation that operates from the same site.

Planning permission was obtained fairly straightforwardly. The whole of Potsdam is governed by a ‘B-Plan’. This broadly supported the new building provided it did not ‘dominate’ the original Villa. This dictated that the new structure could not be higher or wider than the Villa, and it had to be positioned so that the Villa could still be seen from the street.

Although the new building is located in front of the Villa, many other local buildings had been built in a similar position, so the precedent had been set.

As part of the work the group also provided a children’s play area and parking facilities.

Not everyone wants to own a home

It is possible to deliver affordable/intermediate level housing using this model, and there are plenty of people who are happy to rent, rather than ultimately own their homes – provided the building has low running costs, and the rent is significantly lower than open market levels