Over the last 20 years the city planning team at Tübingen has become recognised as one of the most innovative in Germany. The city lies 40km from Stuttgart and has a population of around 86,000 – many of them working at the university or in research.

The centre of the city is quite high density. There is strong demand for land for new homes, but the city is largely ringed by a protected green belt. 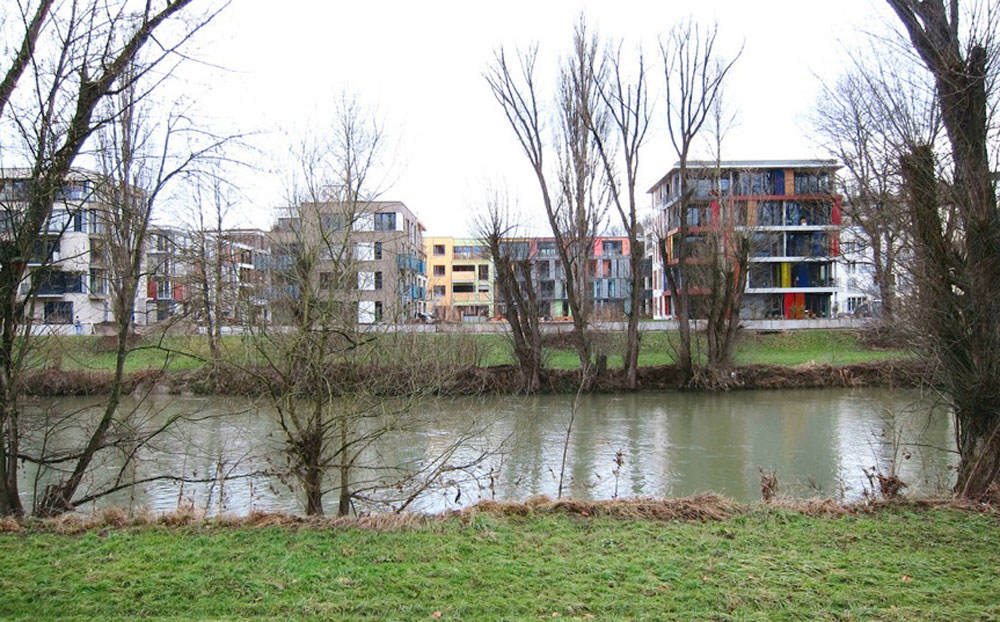 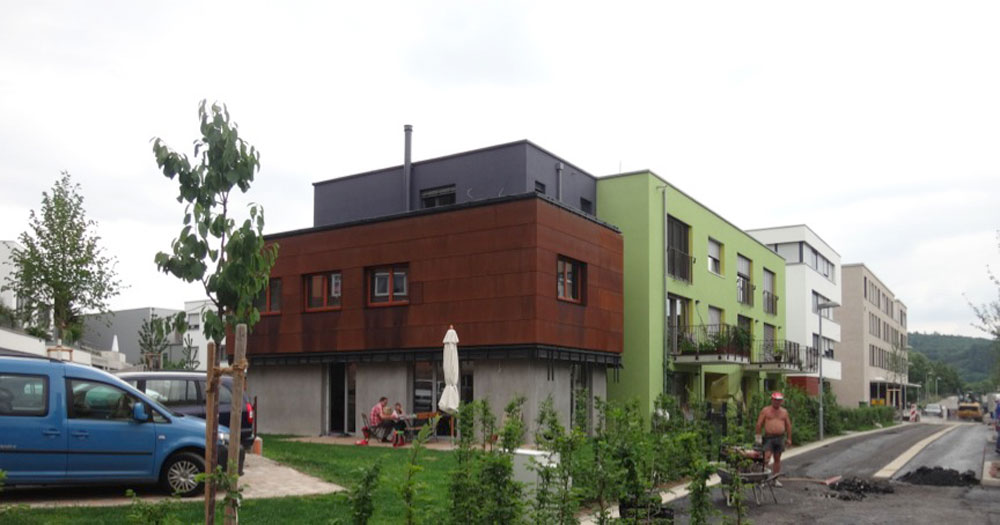 Single houses (in the foreground), semis (the green ones) and blocks of apartments have all been integrated into the development 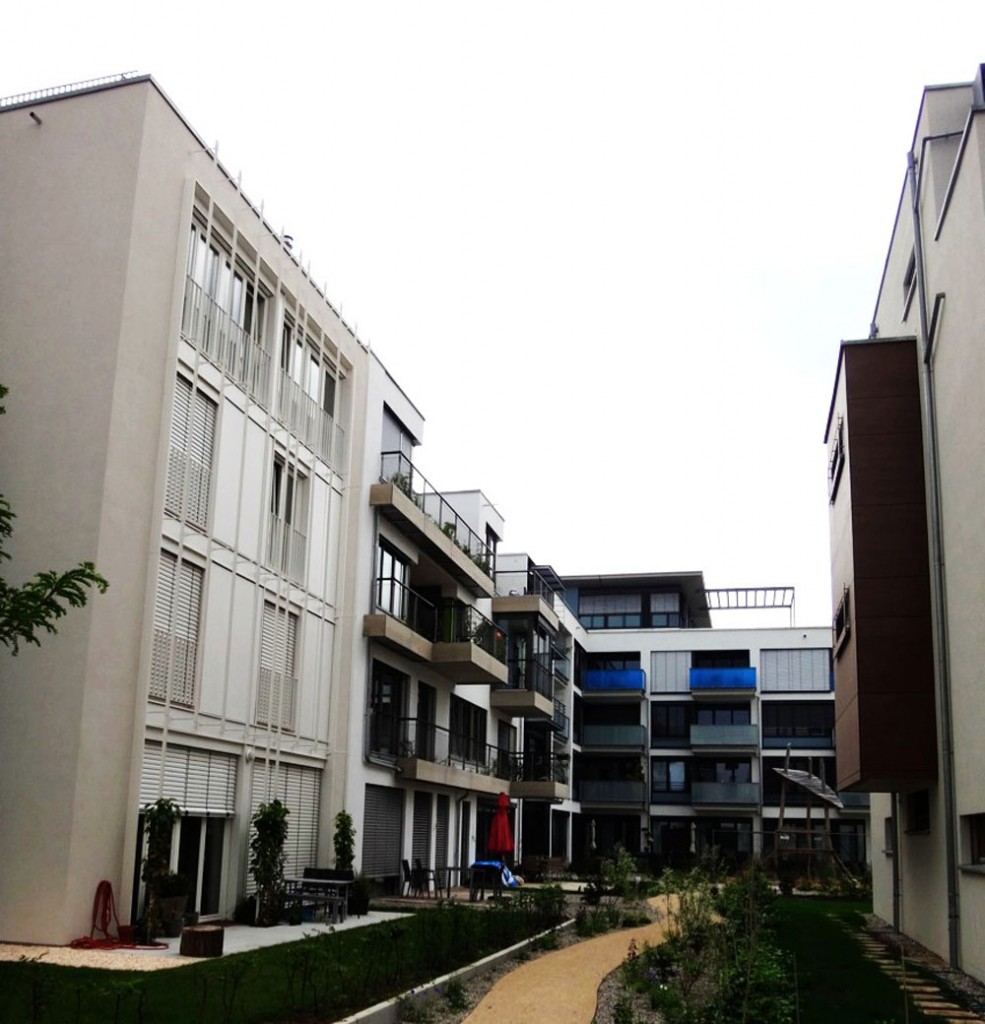 This site was occupied by a redundant textile mill. The council’s own development company acquired the land, organised a master plan and then marketed the larger plots to locally formed building cooperatives. Some individual self build plots were also provided. Collectively it now provides homes for around 700 people and has also created about 100 new jobs.

Demand was strong with around 140 groups pitching for the various fixed priced parcels of land. The range of homes that have been built is wide – from high value riverside apartments to a mixture of intermediate and affordable housing too. The clear processes the city has developed enabled the work to be done quickly – from the start of marketing to completion took around four years. Most of the residents moved in during 2015, and the project is seen as one of the most innovative and attractive community-led projects of its type in Europe

A wide range of apartments have been provided – from affordable and intermediate level homes to larger, high end market properties 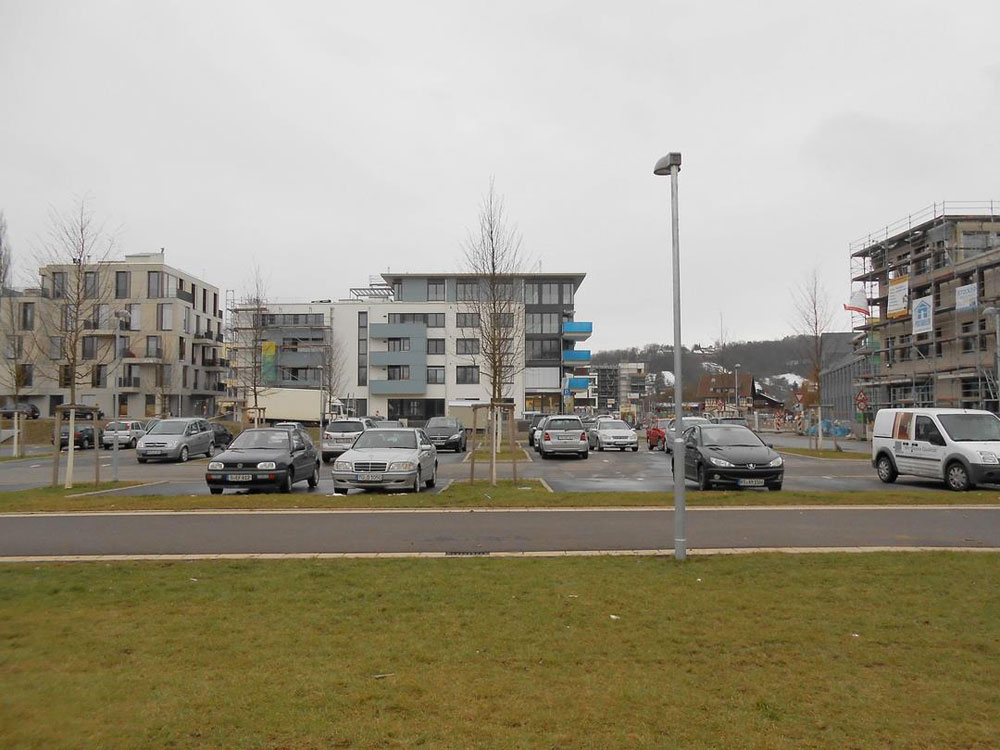 The concept of encouraging communities to help shape major regeneration opportunities started here in the 1990s, when a 10 hectare section of a former military site was vacated. This award-winning development (Französisches Viertel, or the ‘French Quarter’) now houses more than 4,000 people, and has created 1,200 jobs. The site was split into about 30 major plots (capable of accommodating 15 to 30 homes each) and these were only made available (at the going market price) to locally formed building co-operatives. 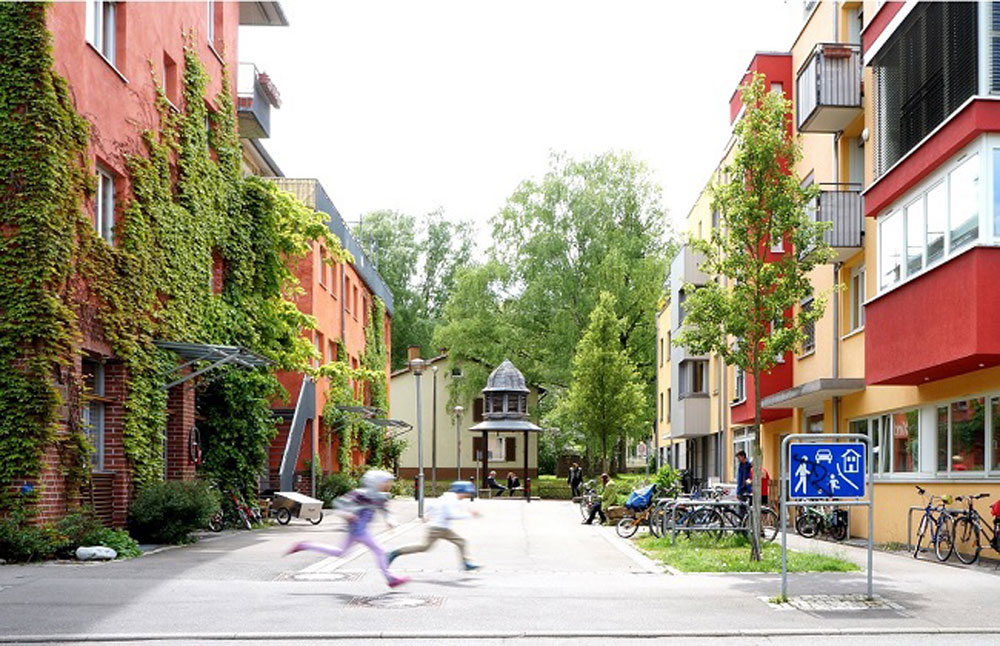 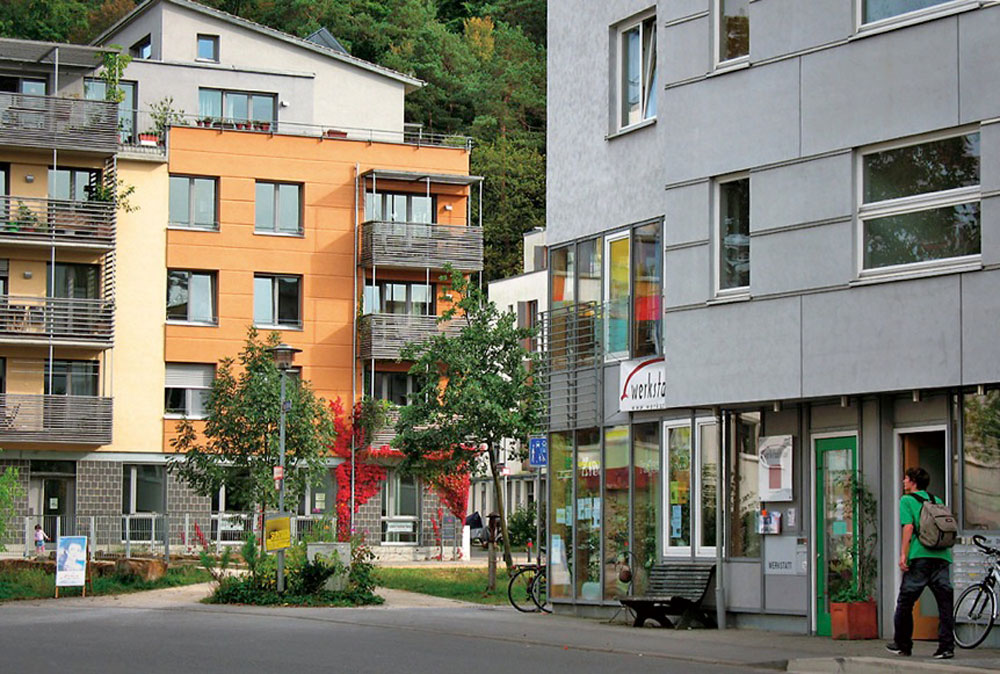 Since this project was built the city has gone on to manage several similar major regeneration initiatives including the Mühlenviertel scheme, completed in 2011. Here a four hectare industrial site has been transformed to create around 400 new homes.

While there has been widespread praise for the city’s various projects over the years some people have argued that they are most suited to middle income/university educated groups, and that they don’t deliver much intermediate/affordable housing.

Mindful of this the latest project – Alte Weberei – has taken the concept on a stage, and has delivered a very wide mix of residential units, typically 10 to 20 per cent cheaper than equivalent homes delivered by the private sector.

The site is about two miles east of the centre, on the northern side of the River Neckar (in a district called Lustnau). It was formerly a big textile mill operated by Egeria. The company got into financial difficulties in the 1990s and production stopped in 2003. The council owned development company (WIT) bought it for €4.5m in 2008. 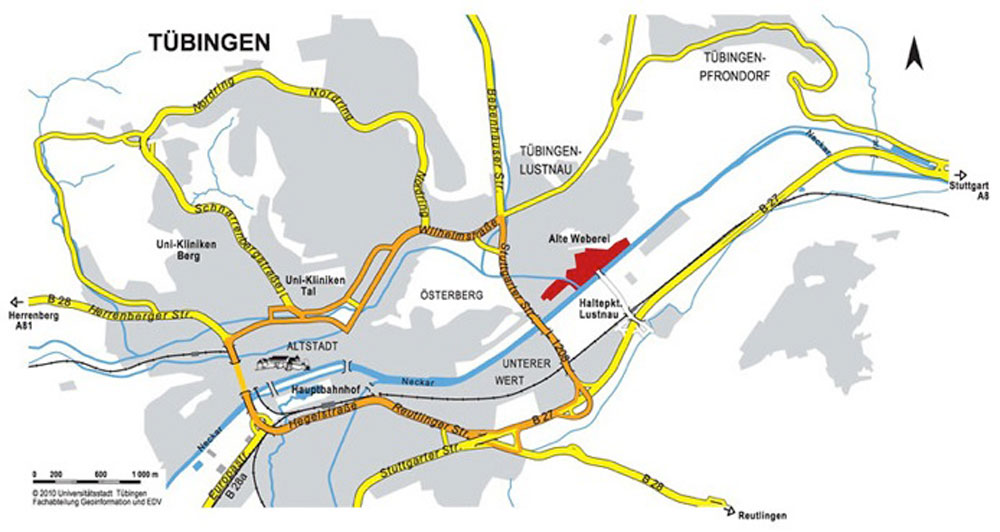 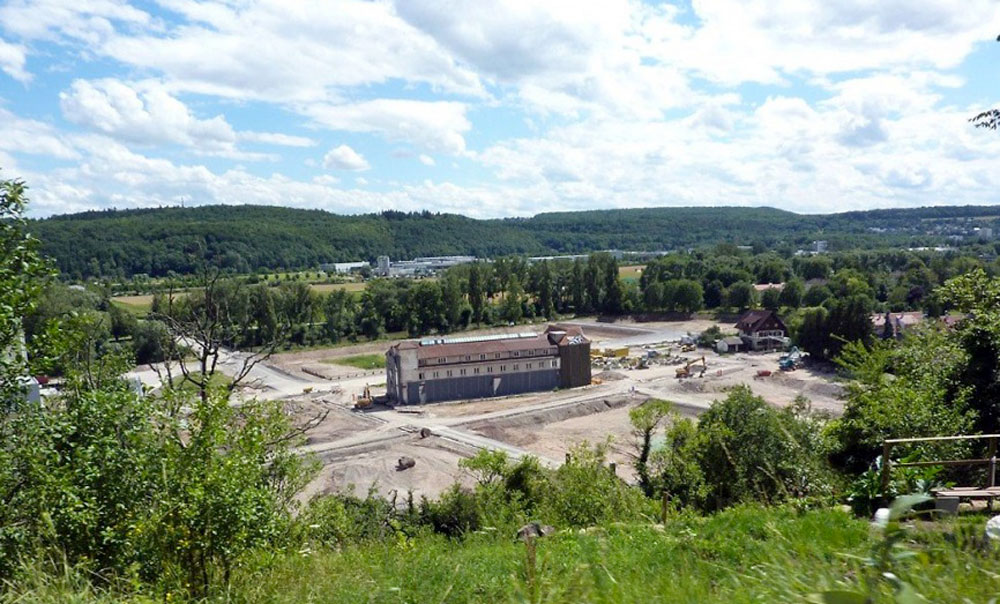 A heritage illustration of the former textile mill The arrangement of the 25 groups, as construction work neared completion

Once the council had control of the site the team from its development company, WIT, undertook extensive consultations with the local community to understand what they wanted from the regeneration. It then organised an urban design competition – won by a local office of architects called Hähnig and Gemmeke. 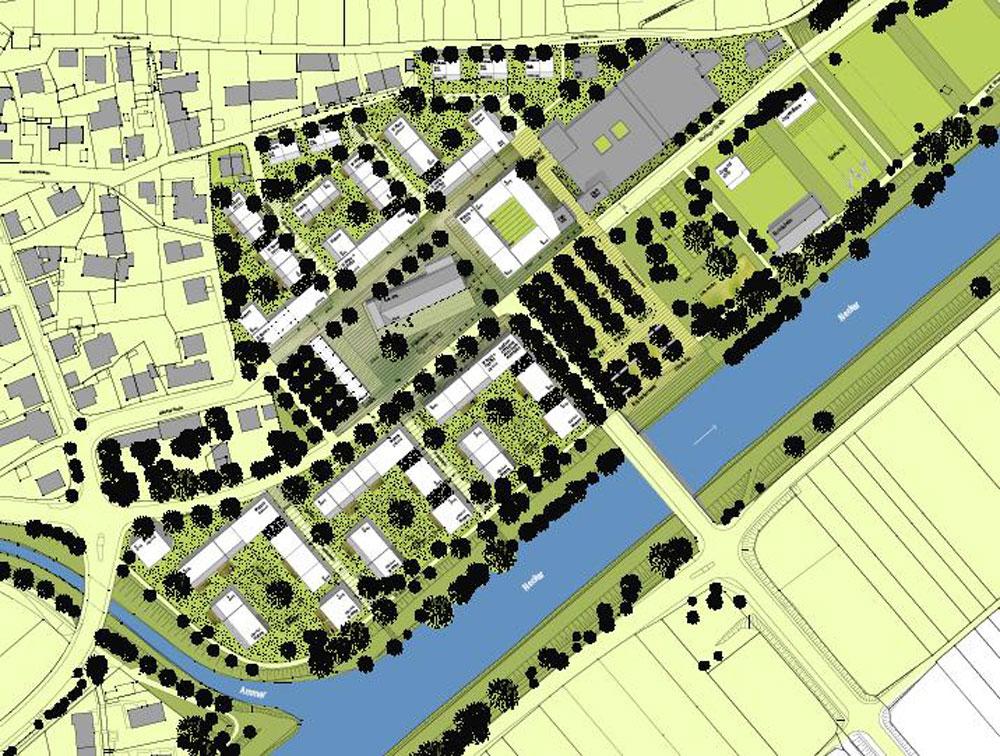 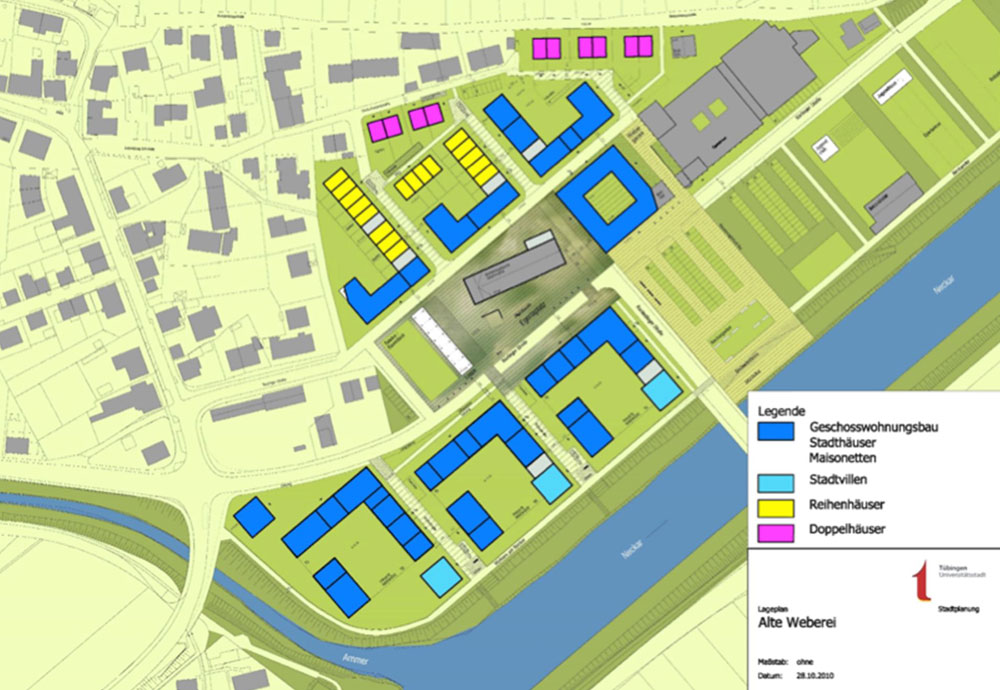 Invest in a viable master plan

Spend lots of time up-front getting the master plan and urban design framework right, and ensuring the financial viability of the various blocks; if the plots are over-priced people will not be able to bid for them

This had to take into account a number of practical challenges with the site. A large portion of it was susceptible to flooding, parts of it were contaminated and some of the older buildings were thought important and were to be retained.

The master plan revolves around some of the older buildings, which now form a focal point in a new urban square. This is also where the local commercial/retail uses are concentrated (the grey blocks in the plan).

Along the river front are about 25 blocks of apartments arranged in three main clusters. These range in size and can accommodate between about 10 and 30 homes each.

The individual self build plots (and the ones for groups of two or three homes) are located on the northern side of the site. Parking is provided in two large shared underground car parks, and at surface level by the river (this area is prone to flooding and could not be built on).

Include opportunities for diverse smaller blocks

The council’s development company, WIT, then drew up the brief for the project and set out each of the plots, calculated the prices for each and marketed the opportunity.  The plan below shows the prices per sq m – the plots nearer the riverfront were more expensive – up to €850 per sq m; those around the square started at €200 per sq m. 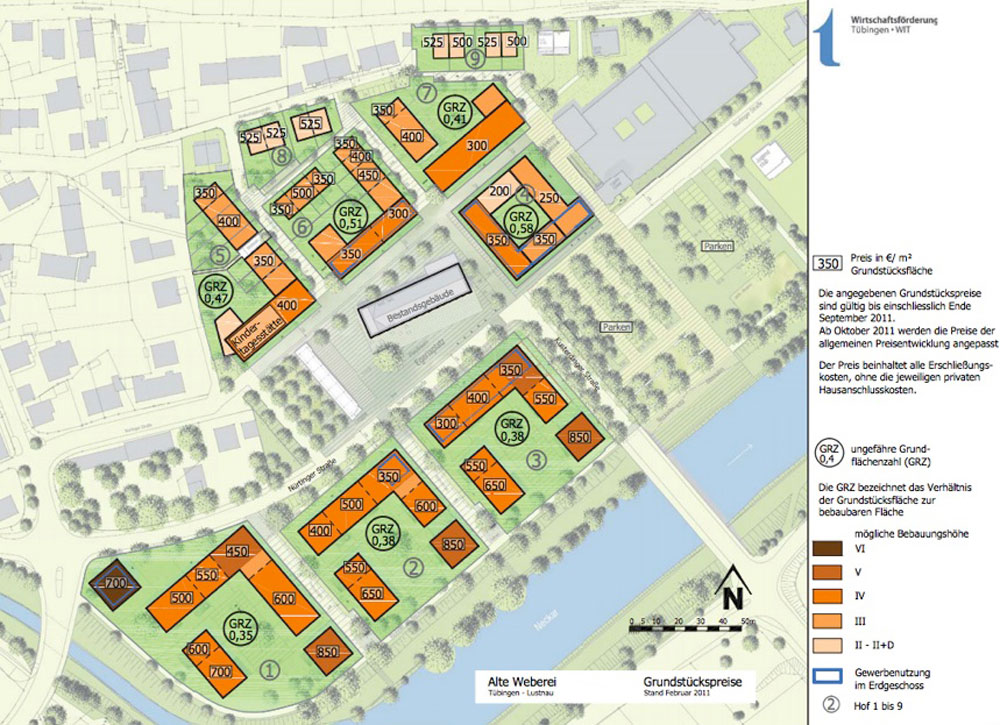 Plan denoting the price per sq m for each plot 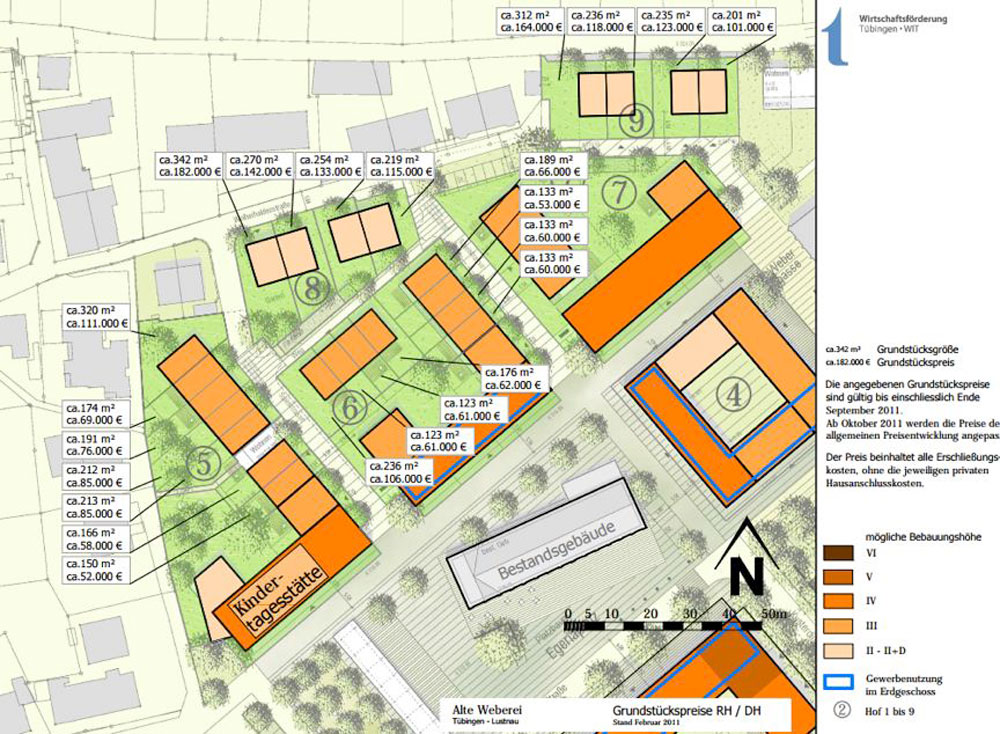 Plan denoting the total, fixed price of each plot and its total area (in sq m) 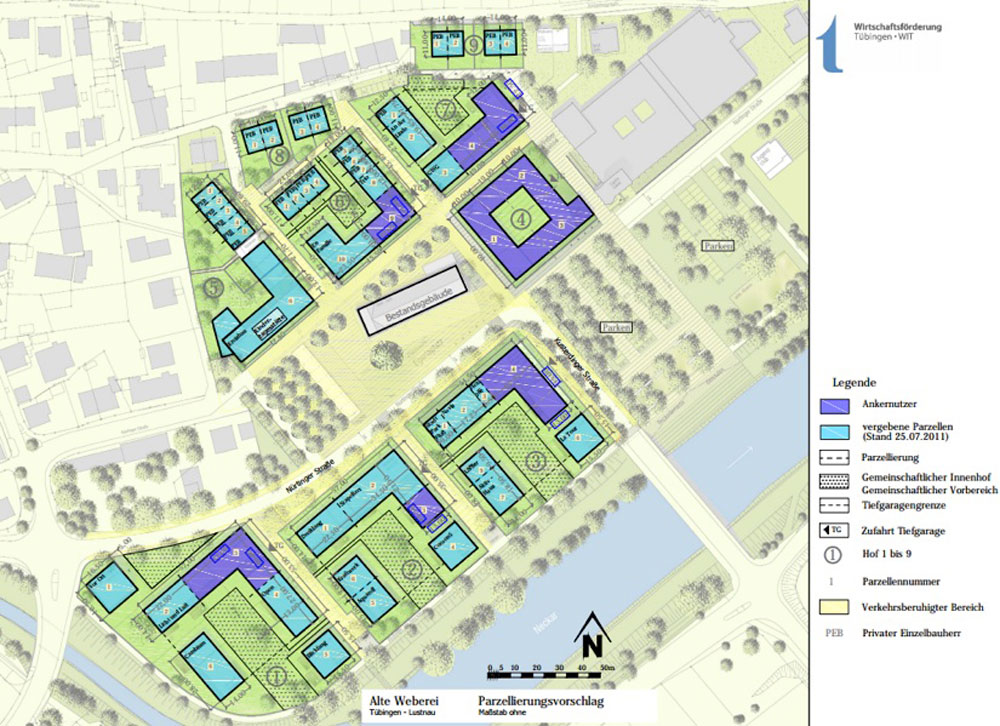 The purple sections on this plan identify the main ‘anchor users’ – plots sold with the responsibility to lead on the construction of a shared underground car park for each block
The individual building plots, to the north, ranged in size from 123 sq m to 342 sq m, and cost between €52,000 and €182,000.

WIT set the price for the various plots, so that the selection of the preferred organisations to build was based on the quality of their proposals – not price. The company’s aim is to cover its cost, not seek to make a profit.

The quality of the submissions was assessed by a jury and took into account the contribution the block would make to the whole neighbourhood, the social diversity it would bring/offer, the calibre of the design and its eco credentials, and the level of innovation it displayed. The jury also assessed how realistic/viable the group and its submission was.

Some councils in Germany prefer to publish a set of criteria that they formally score each submission on; in Tübingen they don’t think this is the best way, arguing that some of the criteria will be subjective, so it prefers to assemble a respected jury (with community representatives, local politicians and independent experts), it gives them some pointers, and lets them decide who will get each plot. It says it is happy to accept the odd ‘wildcard’ submission (perhaps one in 15), as it wants to encourage new approaches/solutions.

At the selection stage the council does not want to see fully worked up designs (as this costs the groups money, and much of it will be abortive). Instead it asks for a succinct description (in words) that explains the group, its background and objectives, and broadly what it wants to build.

On this project those pitching for blocks had to identify their preferred location, and also a second and third choice option. They also had to identify how ‘wide’ a section of the blocks they ideally wanted. This enabled the jury to adjust the blocks to fit in different groups in their second preference location if someone else had excelled with their concept for their first choice location.

Images showing some of the built out homes

Be very clear about the selection criteria

Councils need to be very clear at the outset about the bidding process, so groups know what is required and the selection criteria. Don’t require groups to formally submit detailed designs – two thirds of the bidders will not be selected, so this could lead to lots of abortive costs. Simply get the groups to fill in a form about their members and ‘pitch’ their concept/objectives in writing (over just a few pages)

The site was acquired in 2008 and an urban design competition staged in 2010. A Bebaungsplan (or master plan) for the area was agreed in 2011.

Marketing of the blocks began in 2012, and successful groups were selected in mid-2013. Those selected then had six months to formalise their group, design the building and get their finances in place. After four months they had to pay one per cent of the land price as a non-refundable deposit. All the groups then had to collaborate to work out how they were going to build and finance their share of the communal underground car park, and how they would create and manage the shared gardens. The six anchor groups – one for each of the main blocks – have responsibility for pulling this together and were required to drive this part of the process.

All of the blocks were complete by mid-2015. 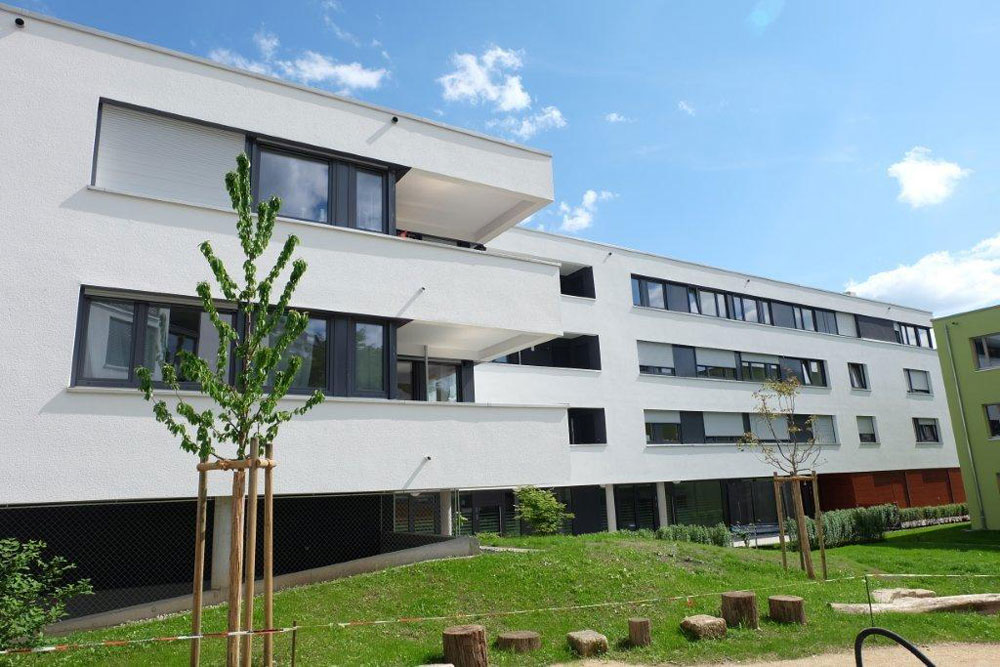 A care home for the elderly forms part of the development

Meet the groups face to face

It is helpful to meet each group that pitches, so that you have a clearer idea of their proposals and their likelihood of being able to deliver

There was good demand with 140 groups bidding for the 40 to 50 opportunities that were available.

The land cost €4.2m and the ground remediation cost €3.4m. The decontamination work was paid by WIT, though €2.1m of the cost was recovered from a grant.

The receipts from the land sales were €13m. Although the development company does not have a remit to make a profit it has generated a surplus of around €1.5m on this project.

WIT incurred higher costs than originally expected for the construction of the streets and the land remediation work. However it also generated a little more income from the sale of the plots, so this helped to balance the budget.

The council’s own team that worked on the development consisted of two planners, a technician and an administrative assistant. Their time was not allocated to the development’s costs. WIT has one full time member of staff and a part time assistant and their costs did form part of the project budget.

WIT says that the main challenge it experienced was the overall management of so many diverse building projects that were underway at the same time across the larger site. One or two of the groups were also delayed when individual members left, or in one case, when a member could not raise the finance needed.

The plots were launched with a large public meeting, attending by individuals and partially formed groups (and their potential professional advisers attended). Around 800 people turned up. At this the team from the development company explained the process for bidding for the plots, and distributed a range of simple documents that set out the plot prices for each parcel of land, the selection criteria, the deadlines and FAQs.

There was no formal advertising done; the team relied on the PR department at the council to promote it via the local media. 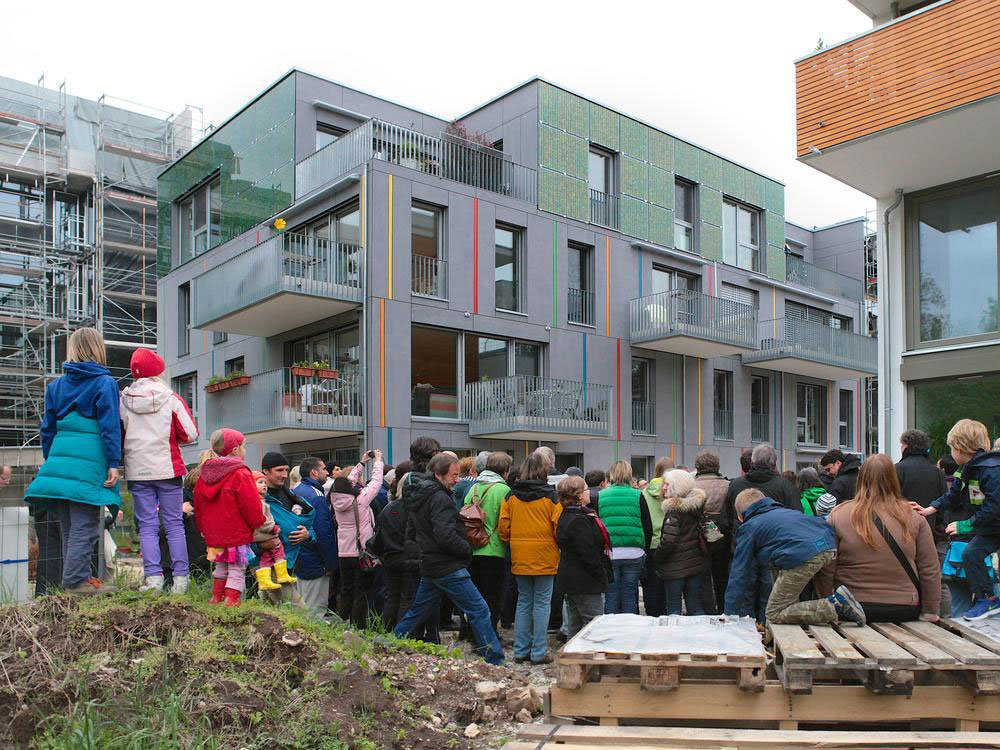 The master plan for the whole site also included a Bebaungsplan (B-Plan). This set out clear guidelines for each block, including maximum heights, building lines, development ratios etc.

The selected groups and their architects all complied with this (except for one or two minor details) so planning permissions were granted very straightforwardly. 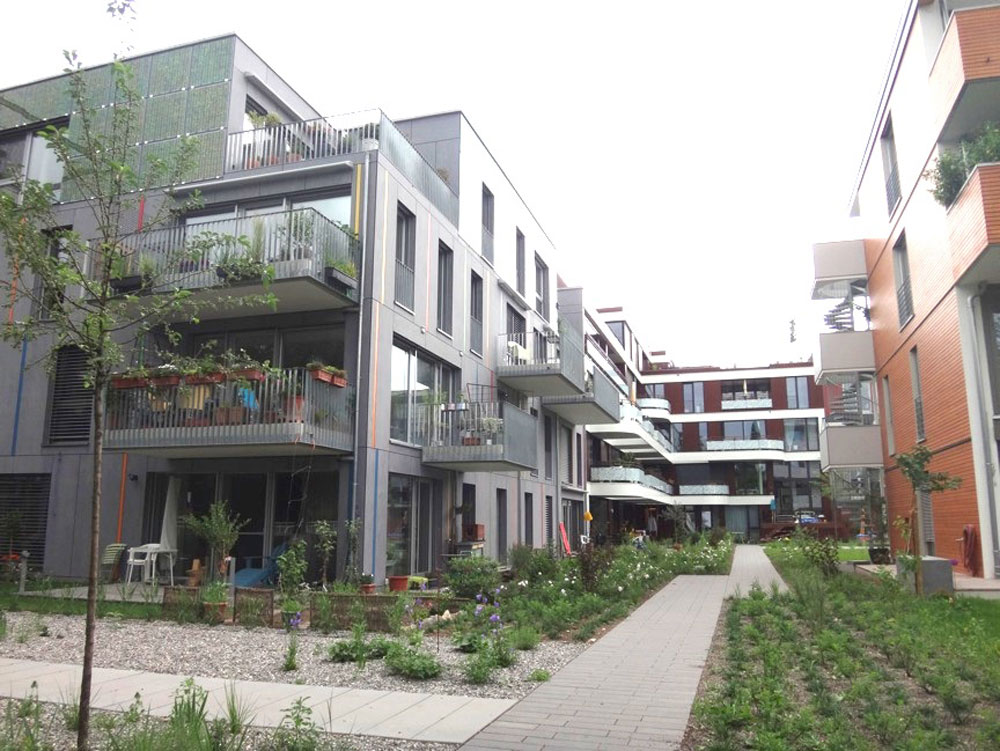 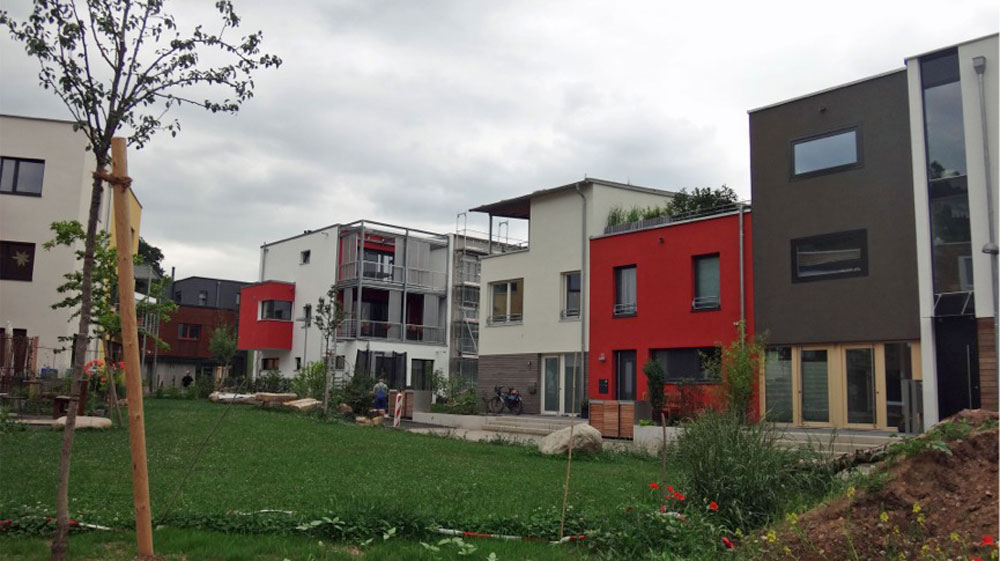