In Berlin, more than 100 group projects have been completed over the last 15 years, and in 2014, around one in six of all the new homes in the city were self organised by local communities. This project, on a site overlooking the River Spree is one of the largest and most innovative.

The co-op was formed in June 2007 when a group of Berliners came together as part of the “Media-Spree Versenken” (Stop the Media City Complex) initiative. The group was keen to come up with an alternative to the office buildings that were being proposed for the site, and wanted to ensure the Spree riverside remained open for public use. 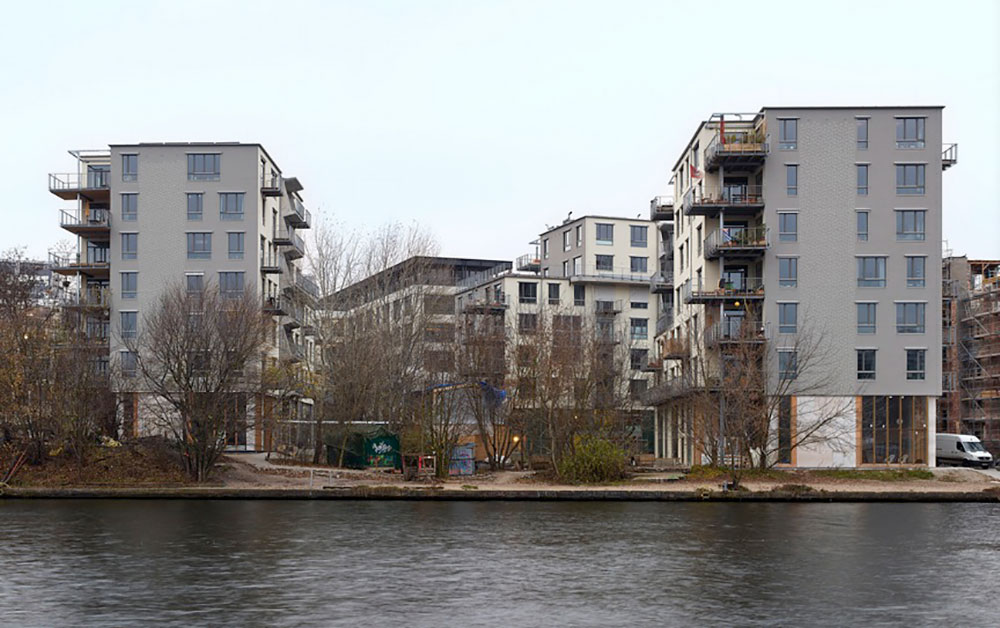 A view of the project across the River Spree

This is one of the largest and most innovative group build projects undertaken in berlin – a city where one sixth of all the new housing is organised by groups. The co-operative project provides 65 apartments in three seven-storey blocks. All the homes are built to Passive House standards

The members formed themselves into a housing co-op  (Spreefeld Berlin eG) in order to bid for the 7,414 sq m site. The land was sold at the market price, with the group initially securing an18 month option in March 2009. During this time it negotiated with the local stakeholders and the city authorities, and secured full planning permission.

The price paid for the land was just under €340 per sq m.

The development provides 65 apartments in three seven-storey blocks. All the homes are built to Passive House standards. A total of 10,000 sq m of space is provided – 5,485sq m of this is residential accommodation and there iare also a range of communal or commercial spaces. This includes guest apartments, a fitness room, salon, and a music room (collectively 350 sq m), business units (980 sq m), and other multi-purpose and terrace areas.

The basic shells for the apartments were built by a contractor on behalf of the housing co-op; the interiors were fitted out and finished by the residents. The group wanted to establish a mixed and sustainable community, with wealthier and poorer, young and older and a mix of those that wanted their own space with those that wanted to live in a very communal way. It also wanted to build as cost effectively as possible, to minimise the resident’s on-going housing costs. An apartment in the complex currently costs about €2,100 per sq m – similar sized flats in a private developer’s block nearby are three times this price.

If you are trying to acquire a site see if you can negotiate an option – this then gives you time to organise the detailed design, finance and secure any permissions that may be required

The group kept its construction costs down by opting for: –

The group decided to make the garden and the Spree riverfront open to the public, and the ground floors of all three blocks are used as work spaces or community facilities.

The project was set up so that people on low incomes could be involved. Some of the wealthier co-op members have purchased 50 per cent of their homes (paid for outright from their savings); others have taken a mortgage to secure their 50 per cent equity stake. All of them then pay rent on the other 50 per cent. A number of apartments are available purely on a rental basis. At the lower end the rents are equivalent to typical social housing costs in Berlin.

The residents are diverse – both multigenerational and multicultural, and range from some reasonably well off people to those on low incomes. All the apartments are barrier-free; there is communal use of laundry rooms, fitness rooms, guest rooms, rooftop terraces, and a music and youth room. 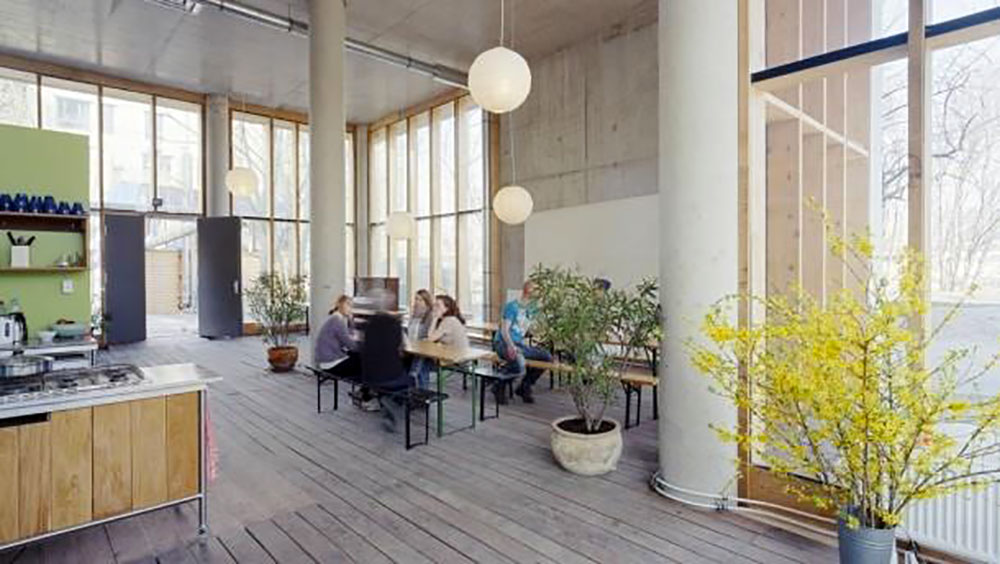 One of the three communal ground floor spaces is a café that adjoins a commercial kitchen. One of the residents also runs an outside catering business from here
The individual blocks were designed by three different architects working with the three separate groups of residents, with a fourth architect acting as masterplanner and ‘design controller’. While the overall development looks broadly similar each block has its own distinctive features. For example one has double height spaces, another has very large balconies. 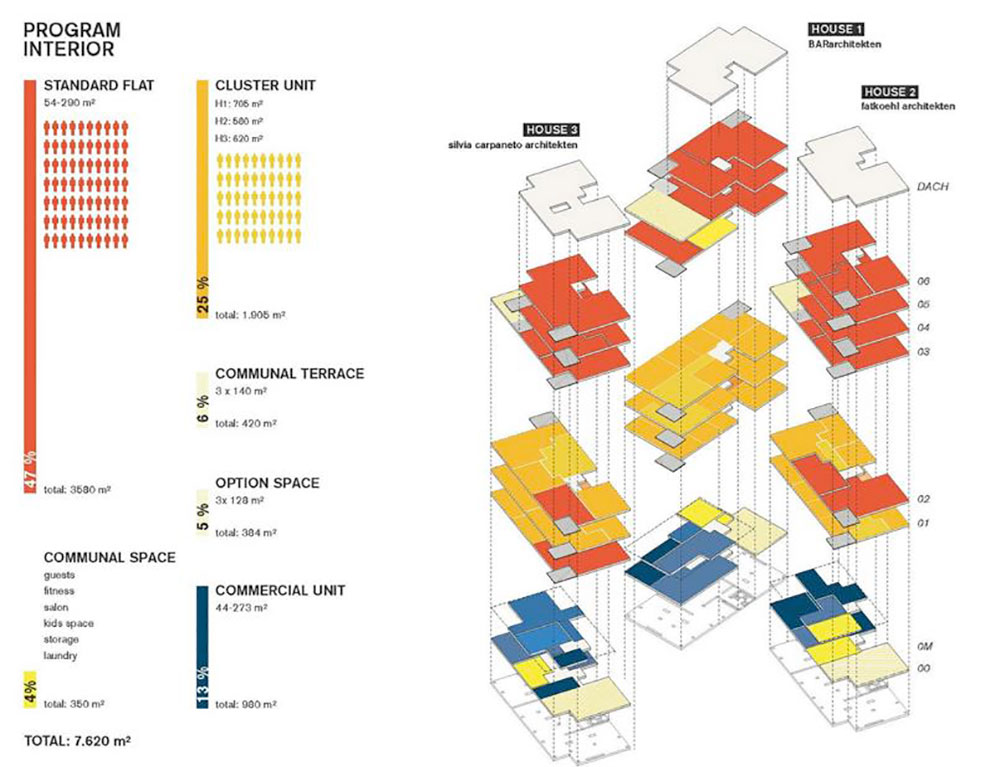 The large ‘cluster’ apartments are highlighted in yellow

The site cost the group €2.5m in 2011 (£1.8m), and the total construction cost for the three blocks worked out at €14.2m (£10m). This includes the communal spaces at ground level and the various workshops and offices that have been rented out.

Once the co-op members rents have paid off the loan they took out to cover the construction costs this income will be used to help similar developments get off the ground.

Every square metre of space that isn’t being effectively used is expensive to build, and will contribute to your on-going running costs. Spend time reviewing your designs to design out anything that really isn’t needed