This 97 home development in central Zurich was completed in mid 2014. Eighty per cent of the homes are available at well below local market rents, and eleven of the properties are reserved specifically as social rented housing. It was organised by a local community group that set up a housing co-operative to manage and procure the project. The group is now working on a second development that will deliver a further 70 homes.

The 0.6 hectare site is bounded on two sides by busy thoroughfares and on another by train tracks. For years it had been used as a tram depot, and had long been considered too noisy for housing.

In 2006 the local community came together to form an association (‘Verein Kalkbreite’), and it held a series of public workshops, to take a new look at the site. This was collaborative venture that took 18 months and it involved many partners including the City of Zurich, the local public transport corporation and the Karthago and Dreieck co-operative associations.

In 2007 Verein Kalkbreite set up a housing co-op –The Kalbriete co-op – to submit a proposal to the city, and the council supported the project. The submission proposed 5,000 sq m of commercial space and 7,400 sq m of residential space. The plan provided homes for 250 residents of diverse income, ethnicity, and age; and it included a new tram depot.

The 5,292 sq m of communal facilities that were proposed included a shared laundry, library, canteen, roof garden and terraces.

This 97 home development in central Zurich was completed in mid 2014. Eighty per cent of the homes are available at well below local market rents, and eleven of the properties are reserved specifically as social rented housing. It was organised by a local community group that set up a housing co-operative to manage and procure the project. The group is now working on a second development that will deliver a further 70 homes.

PEOPLE AND THE RANGE OF HOMES

The homes are very diverse and include some multiple household configurations. This means there are conventional apartments with two, three, four, or five bedrooms for traditional nuclear families; but also apartments with up to 17 bedrooms for extended households; and studios with bathrooms and small kitchenettes grouped into larger ‘clusters’ with shared common spaces and a communal kitchen. There is also an extra-large cluster of 20 mini-apartments for 50 residents who have collectively funded a staffed kitchen; and there are nine ‘jokers’ – small units (each of about 28 sq m) with private bathrooms but no kitchens – distributed throughout the project and available for temporary rental.

The co-operative committed to optimise the excellent on-site public transport connections and forego car parking entirely. Instead it has provided ground-floor storage for several hundred bicycles. It has also adhered to Switzerland’s eco standards for Passive House construction and limited the floor area per resident to 32 sq m, (this is much lower than the typical 45 sq m found in most Swiss housing).

The schedule of homes included: – 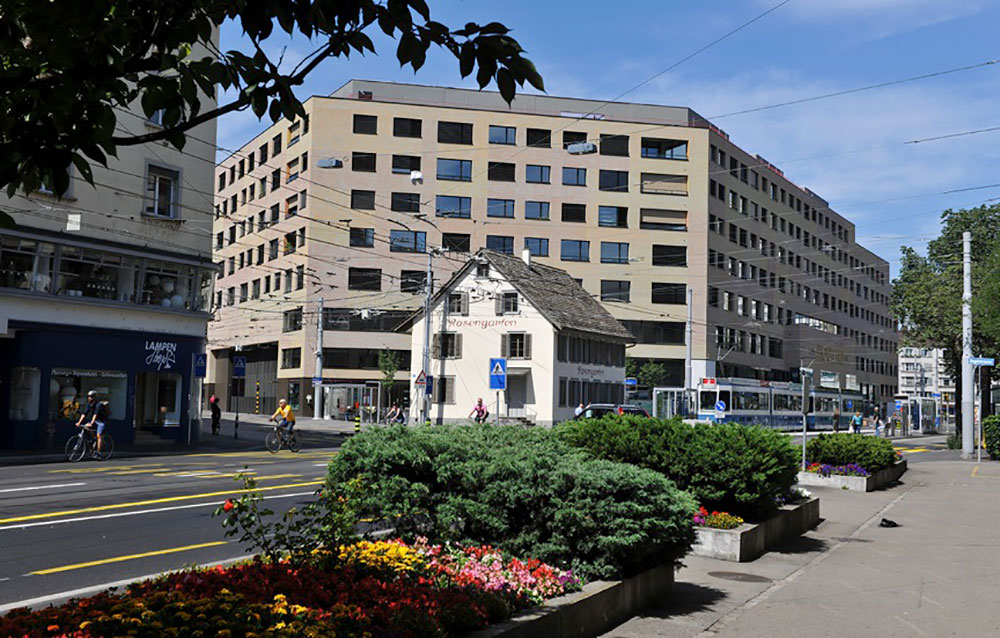 The Kalkbreite project in its setting

To propel the project from concept to reality, the council granted the Kalkbreite cooperative a lease on the city-owned land until 2070 (which enabled the cooperative to qualify for private loans to cover the construction costs from a range of banks and financial institutions). The members of the co-op put up six per cent of the total cost.

The council also approved a grant of £2.2m for a feasibility study, to cover pre-development costs, and to run an architectural competition. The competition –   standard practice for public projects in Switzerland – was won by Müller Sigrist Architekten.

As part of the deal to secure the lease on the site from the council the co-op has agreed that the city can financially monitor its accounts. The rental income should cover the running and finance costs of the development, and the co-op aims to operate on a non-profit basis

Be prepared to consider leasing land

In this case the council offered a 55 year lease on the site; this then helped the co-operative raise the funds it needed to undertake the £42m scheme

Demand has been strong. By spring 2014, almost 900 people had paid the refundable membership fee of £650 to join the co-op — the first step in applying for residence. The residents were selected according to criteria stipulated in the co-op’s statutes to ensure  a wide ethnic, gender, age, and income mix.

A three-bedroom, 100 sq m home requires an equity deposit of £17,000 and monthly payments of £1,250 — below the market rate for similar housing in the city. The majority of the apartments are targeted to middle-income occupants with 20 per cent rented to high-income residents and 11 per cent reserved for low-income households. All are full members of the cooperative.

There is strong demand for innovative housing concepts

The development is built on a triangular site. The ground floor is now a new 3,050 sq m tram interchange; around the tram interchage, and on the floor above, there is a mixture of commercial space – some of which has been sold, and some is rented. The proceeds from this have helped subsidise the cost of the homes. 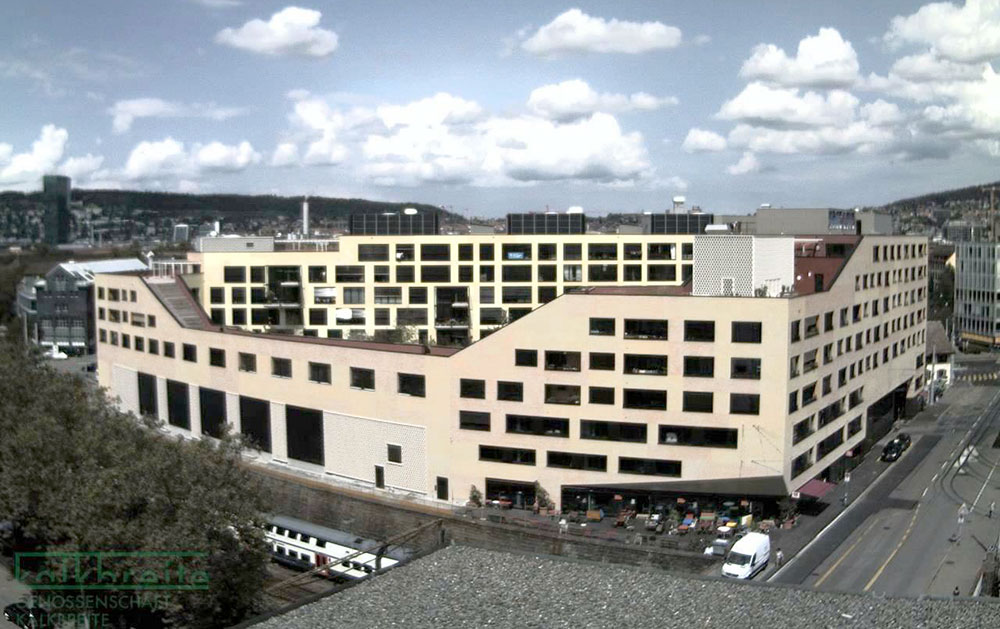 The overall form of the Kalkbreite project
On the third level there is a ‘social exchange’ – an area set aside for a suite of meeting and training rooms, a crèche, reception space, communal canteen and a dining room. 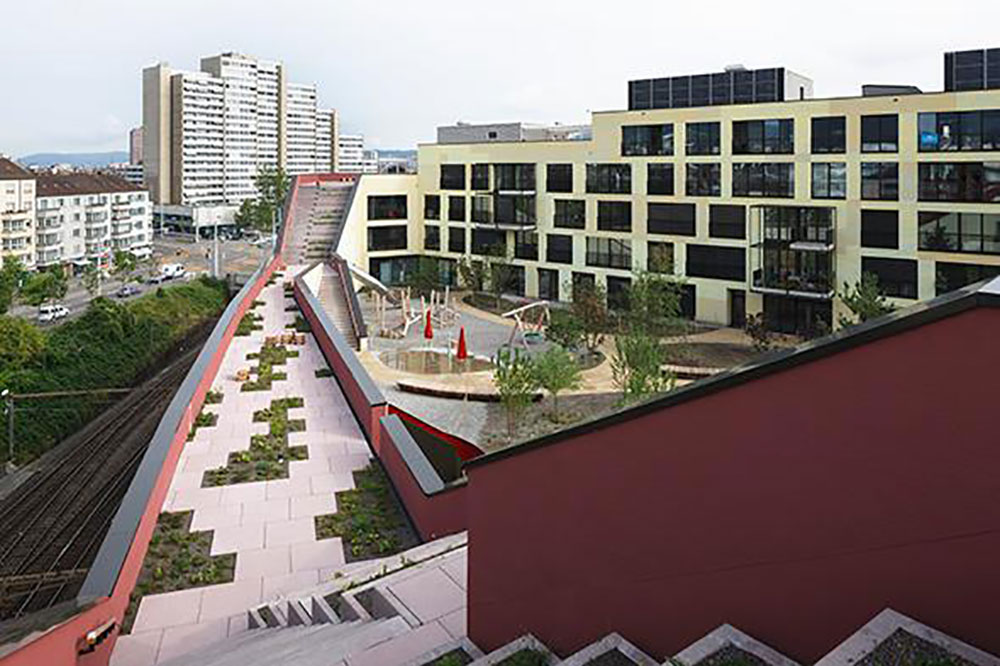 Challenging sites can be attractive to housing groups

Cohousing Vinderhoute and other Cohousing projects