Sub-contractors, managed by the architect on behalf of the group, undertook the main construction work. Most of the homes were fully finished; some were provided as shells and then fitted out by the occupants.

The plot is located in a residential area at the Rummelsburg Bay – about five miles east of the city centre, between the districts of Friedrichshain and Lichtenberg.

On a compact suburban site, five miles east of the centre of Berlin, 11 young families worked collaboratively to build these simple terraced properties. While the homes broadly look the same from the outside, internally they are all laid out differently to suit each family

It forms part of a large urban regeneration initiative on the 130 hectare site of a former industrial and prison complex. The city planners zoned much of the area for residential use (limited to four storeys) and developed an overall master lan, setting out the various blocks for development. 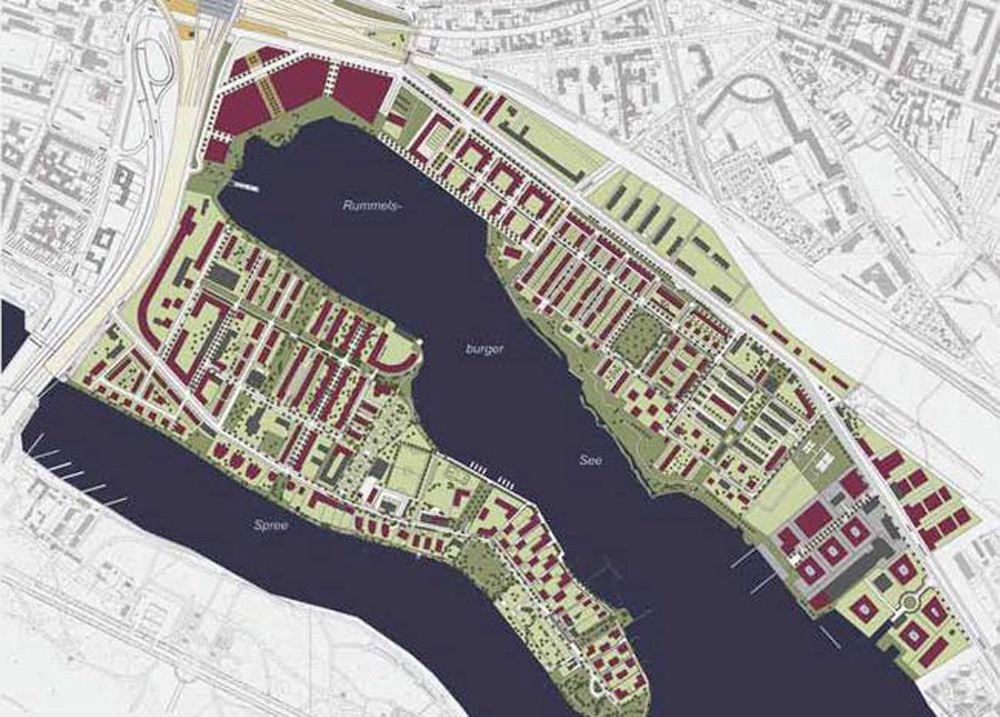 The wider area surrounding the project

Many of the residential blocks in the plan were reserved for building groups (baugruppen), and they were advertised at a set price (the local market price for the 1,507 sq m site here was €450,000 in 2010). The eleven friends came together to acquire the site – many of them knew each other because they had lived close to each other in the past, and three of them were architects who worked at AFF Architekten.

The block consists of 11 private townhouses, each 5m wide and arranged over four storeys. This proved to be the most cost effective way of delivering lots of internal space. While the external envelope and floor levels are consistent across all the homes, the interiors are laid out to suit each family. The location of the staircase is the only significant internal feature that is common to all.

So, from home to home, there is lots of variety – some have large multi-purpose rooms covering a whole floor level, others are more cellular. Some have double height spaces; some have roof terraces. One or two have their kitchens or living rooms on the upper levels; others at ground floor.

The homes are largely built of concrete reinforced panels. The party walls were constructed using a sand-lime brick. Some of the residents retained the concrete wall and ceiling finishes; other have plastered over it. Some have installed swish new kitchens and expensive furnishings; others have fitted their homes out using salvaged or recycled materials.

Parking is accommodated in two large shared car ports at either end of the terrace. 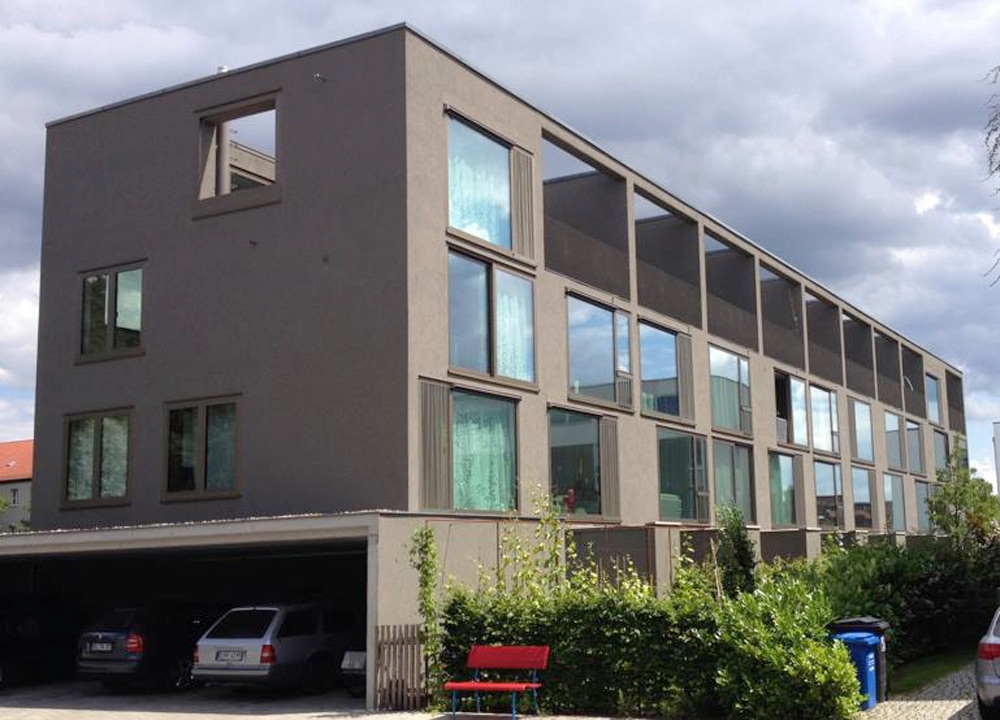 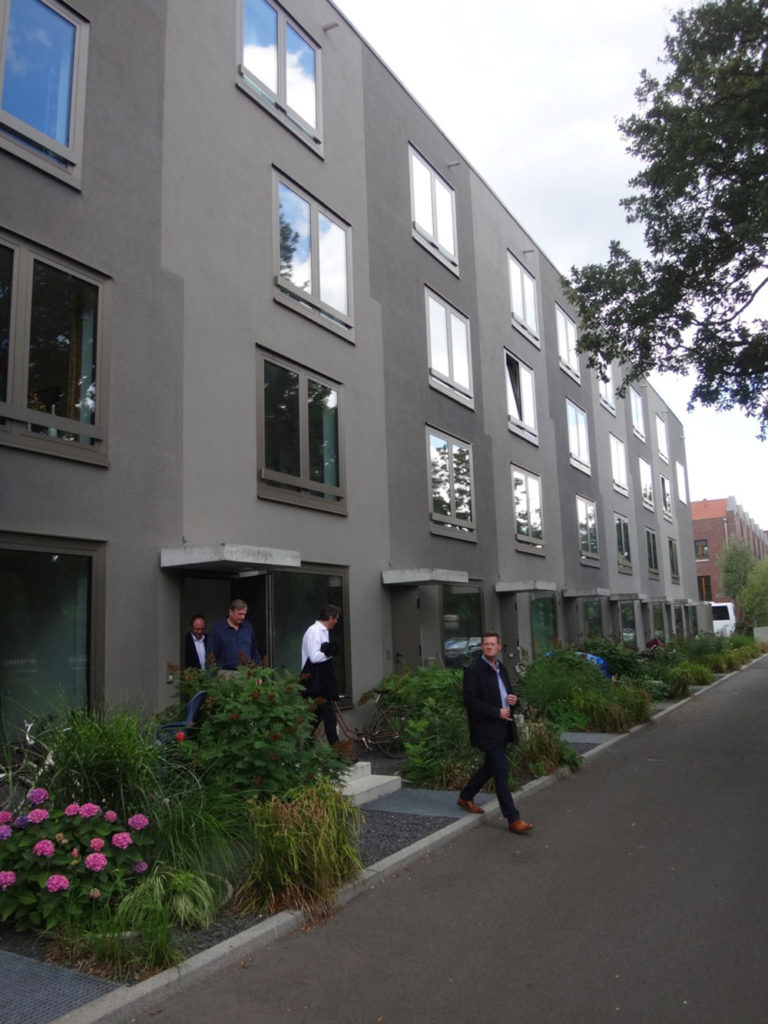 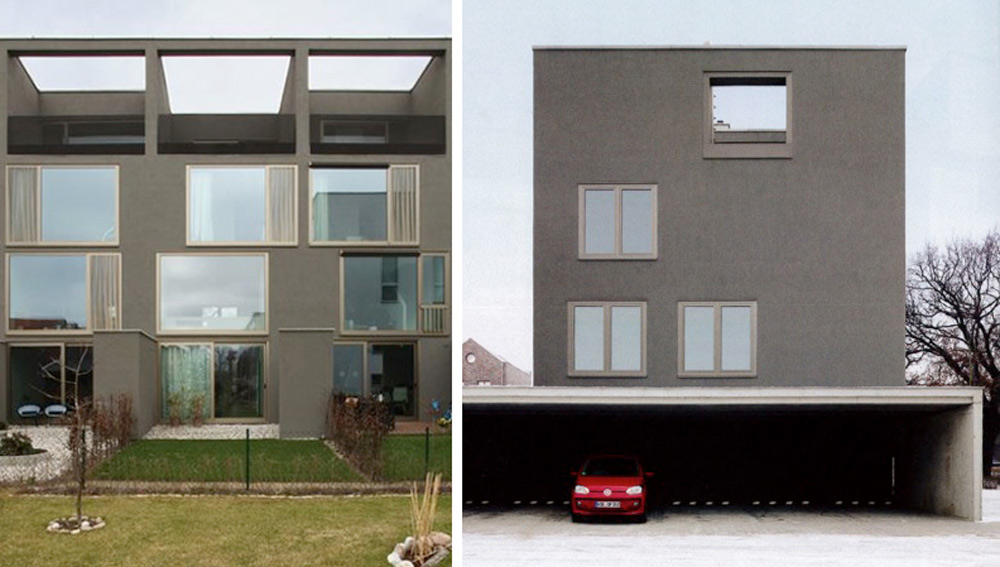 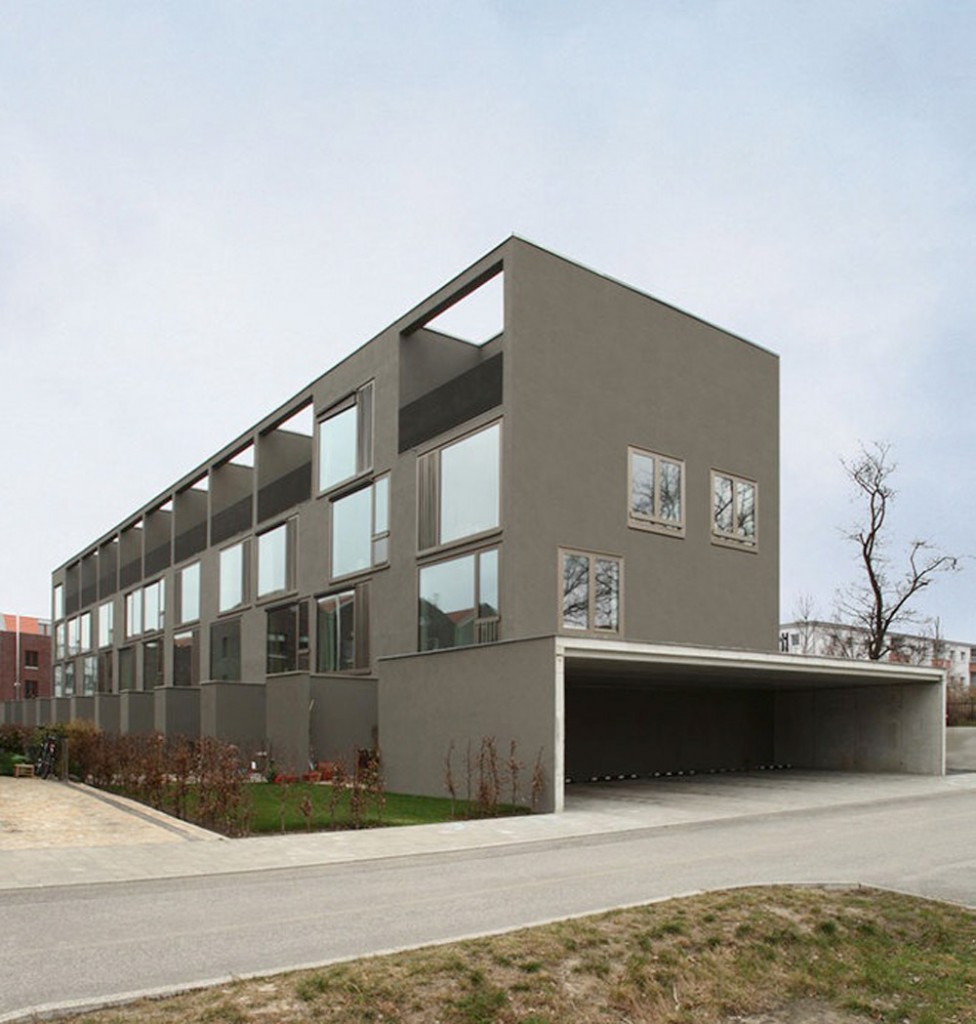 Compact rear gardens and one of the shared car ports 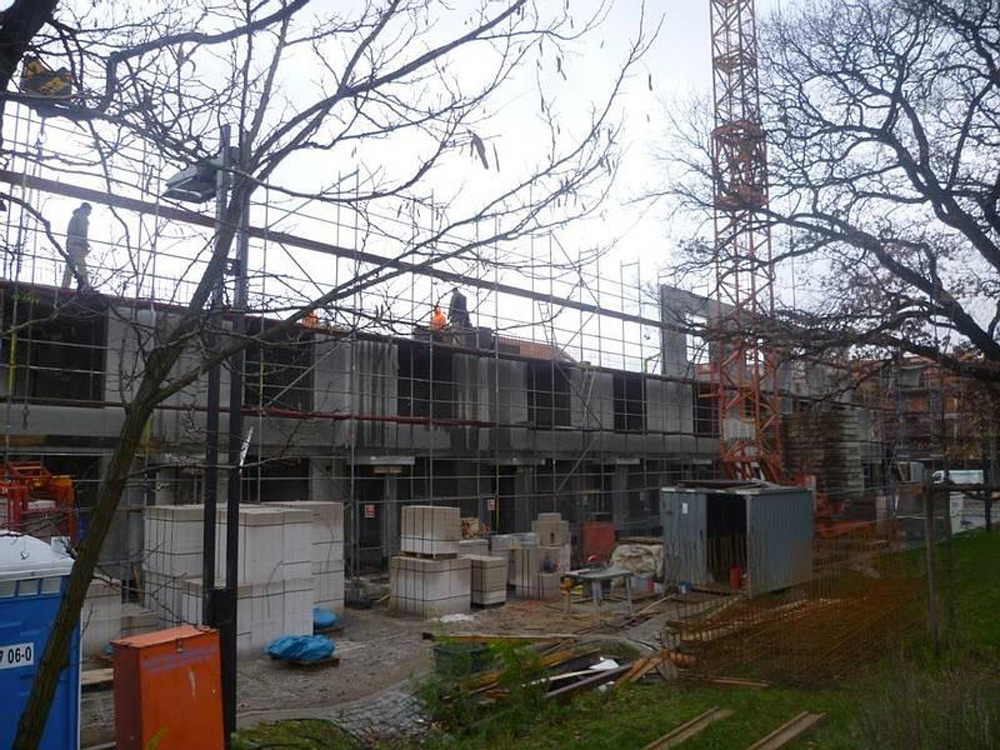 The homes under construction
The homes are built to the German KfW House 70 standard – this means they consume less that 60 kW per sq m per year. This is about mid-way between the local Building Regulation requirements and a Passive House specification. The homes are all linked to a local district heating system.

Note how the windows and layouts vary
Each home is 5m wide and 10.7m deep with a small garden at the front, and a deck and modest back yard/garden to the rear. The individual plots are therefore 113.5 sq m – 5m x 22.7m (the homes at either end have slightly larger gardens). The internal layouts vary, but on average each four-storey building delivers around 140 sq m of accommodation – large enough for a generous four-bedroom house.

Although the gardens are small, the road in front is designated as a play street and there is a fair amount of communal space around the development.  Six parking spaces are provided under each of the car ports at either end. 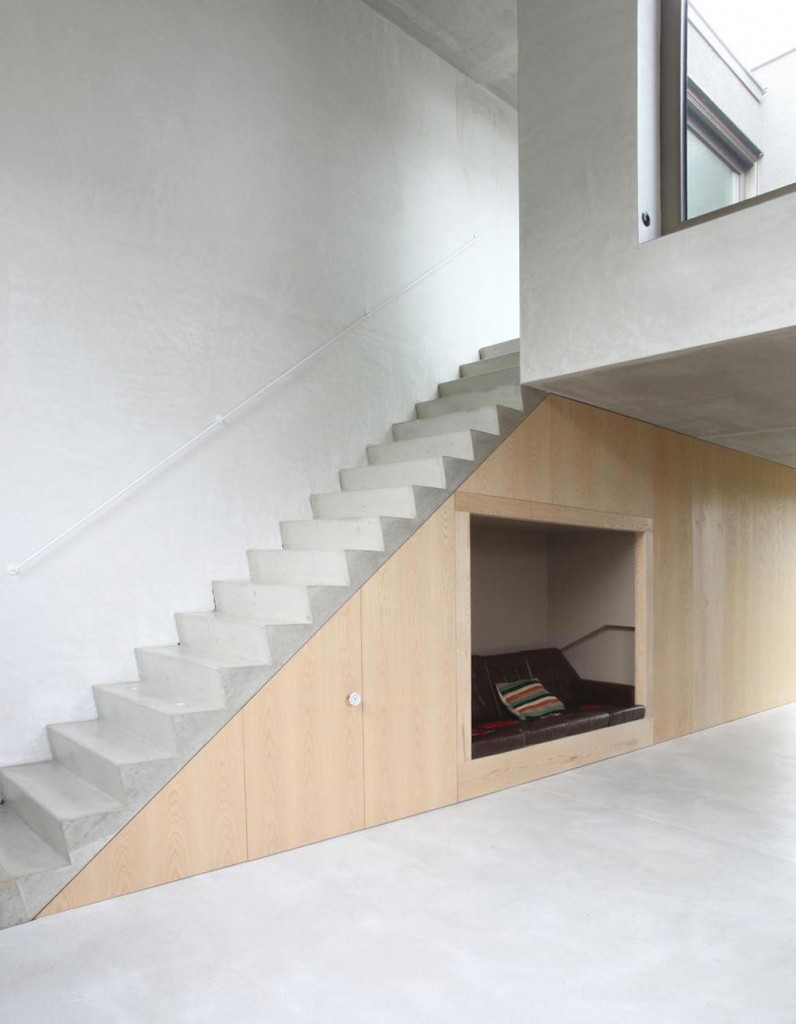 The staircase is located in the same position in each house; some owners have retained the concrete wall and ceiling finishes, other have plastered the walls and painted them

Internal shots of one of the homes

Terraced projects are well suited to the UK

This approach could be employed in most British town and cities, where terraced homes are already commonplace 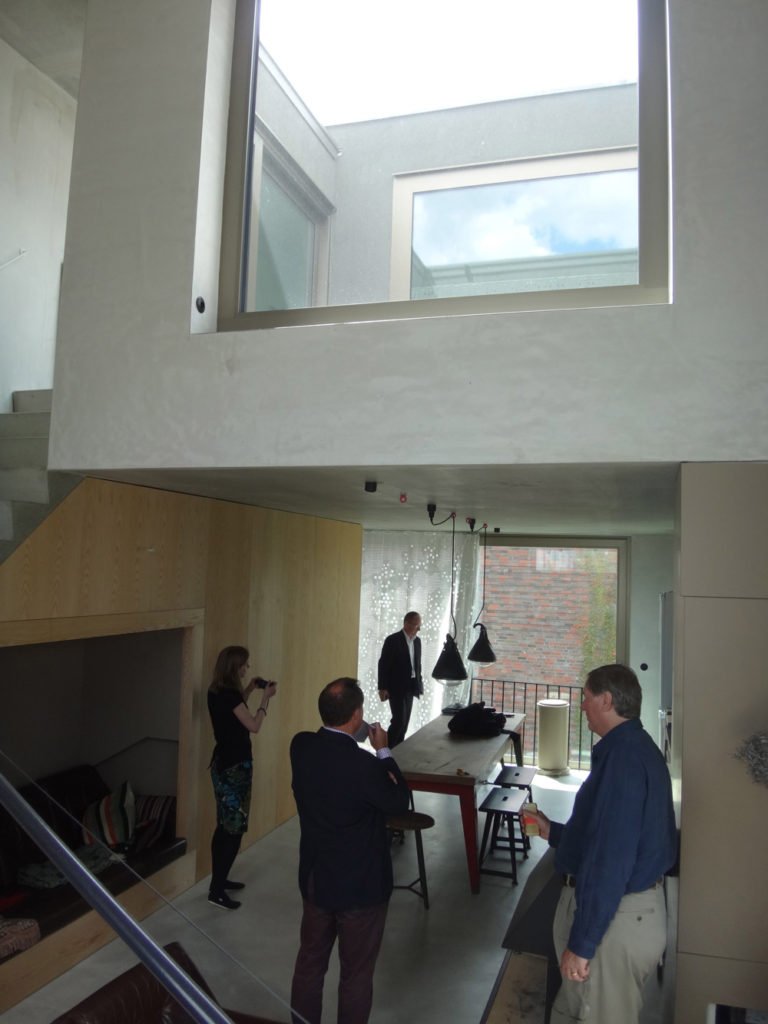 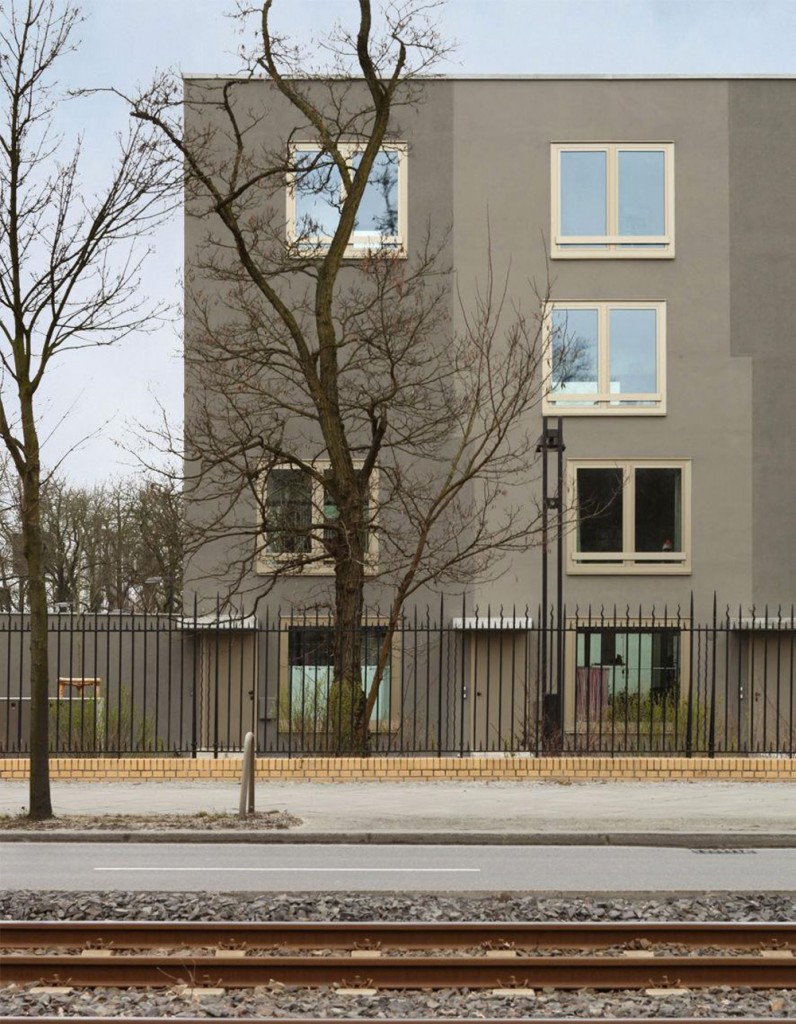 The use of different render colours and textures, and the ‘stepping’ effect they have created along the terrace are inexpensive but very effective architectural details

The quality is in the detail

The group was formerly constituted itself early in 2010 and acquired the land shortly afterwards. Planning permission was secured later in the year and construction began early in 2011. The homes were completed in the autumn of 2011.

Most of the homes were fully finished ready for the residents to move in; three or four of the residents opted for a ‘shell finish’ and then organised the fit out themselves.

The land was sold as a single parcel by Liegenschaftsfond, now called Berlin Immobilien Management (BIM) at a fixed price of €450,000.

The architects who designed the project and then co-ordinated the construction recruited the members of the group. A preliminary design was prepared to show what was possible, and to begin with the architects touted this around their own office members, and then their friends and family. The group grew rapidly, and in the end it only needed to find two additional participants. It advertised for these using the online site www.immobilienscout24.de

A total of 38 people now live there – mainly younger families.

The cost of the site was €450,000 and this was effectively divided between all the purchasers, who each raised around €41,000. All eleven of the buyers went to a notary to pay their share, and then the total amount was forwarded to the Berlin Housing Department (the Liegenschaftsfonds).

Each of the members set up a loan to fund their portion of the project. Most of the residents arranged this with the ING-DiBa bank, which had a financial product to facilitate projects like this. The money each participant raised was then drawn down in stages to pay the various sub-contractors.

Planning permission was obtained straightforwardly. The site was covered by a ‘B-Plan’ that set out broadly what could and could not be built. The group submitted its proposals, which complied with the B-Plan, and the scheme was quickly approved.

Cohousing Vinderhoute and other Cohousing projects