Teignbridge District Council’s trail-blazing Supplementary Planning Document (SPD) has helped it win the top national award for being the most supportive custom build local authority in the country.

The SPD was developed in 2014 and 2015, and was officially adopted as council policy in July of this year. Leader of the council, Jeremy Christophers said: “Custom and self build housing can help provide more affordable homes. The SPD supports planning decisions to deliver land for potential self builders, which will make more land available for serviced plots”.

Since it was introduced more than 100 new self build opportunities have been generated across the district. “I am more than happy for other councils to borrow from our SPD and introduce something similar on their patch,” said Christophers.

“It has been a busy time for Teignbridge as we developed what’s become known as the ‘Teignbridge Rule’, where five per cent of development on larger sites must be for self build. In addition, Teignbridge has recently been speaking to councils in Scotland about its ground-breaking self build work. Winning this award is the icing on the cake.”

The HCA is also working in partnership with Teignbridge District Council to deliver custom and self-build homes.

The council received its award from Build It magazine at a ceremony at London’s Bankside Hilton hotel. 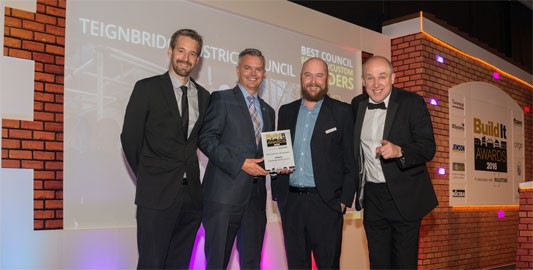