Right To Build Task Force Ambassador Richard Bacon MP spoke recently with Dutch Government at a national conference about the experiences in England of the Right To Build legislation. The focus was on the practicalities and benefits of a policy-led approach for assessing demand for custom and self-build homes.

The visit, also attended by Task Force Director Mario Wolf, was an opportunity for knowledge sharing, with key local and national Dutch Government delegates also sharing their experiences. In addition, a series of inspirational sites were visited on the day.

At the event, Bacon, who’s also the Chair of the All Party Parliamentary Group (APPG) on Self-Build, Custom and Community Housebuilding and Placemaking, shared the experiences and lessons of the implementation of England’s Right to Build legislation, which he was instrumental in establishing.

The conference was hosted by the Netherlands Enterprise Agency in association with the Netherlands Government and municipalities. At the day, the Dutch ’Expertteam Eigenbouw’, commissioned by the Dutch Government and on which the Task Force was modelled, was gathering evidence that would help support it as it experiments with similar legislation to the Self-build and Custom Housebuilding Act.

This is to diversify an increasingly buoyant housing market, enable more affordable home ownership and encourage municipalities to do more to support this form of house building by using a legislative approach to ensuring would-be self-builders have access to plots on which to build their own home.

Bacon explained how the Right to Build registers help English councils evidence demand for Custom and Self-build, which they can then meet by permissioning sufficient serviced building plots.

Although Self-build housing in the Netherlands constitutes about 1 in 5 of all privately owned new homes now being built, compared to just 7% in England, there is a national debate in the Netherlands about the structure and form of the anticipated legislation.

A key aspect of the day was to seek interested authorities to pilot the approach in practice. This would be a policy-driven approach to plot provision, using registers based on the English model but tailored to suit local market conditions and the legal framework.

As part of the day delegates observed innovative  and affordable housing models, including a high-density serviced-plots site in the city, a regeneration project that includes Custom and Self Build plots in Delft, where the municipality compelled the developer to include the plots, and an innovative self-refurbishment model of Custom Build in Amsterdam. 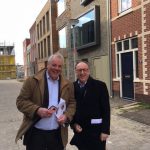 The concept of self-refurbishment as a route to home ownership is of particular interest to the Right to Build Task Force, as it could support its work with English local authorities that have existing housing stock to regenerate, with Custom and Self-Build being a viable route. In the Netherlands, schools and offices are often refurbished as homes, bringing unused buildings back into use and creating additional affordable homes.

In light of the Letwin Review about build out rates for homes with planning permission, the Task Force was also extremely interested Dutch practice that could inform our own experience with regards to fulfilling sites at pace.

To encourage this culture of showcasing and learning, the Task Force is planning a programme of visits for local authorities and practitioners to Dutch projects in association with the Netherlands Government and municipalities. These will provide housing and planning officers, elected members and other practitioners with an opportunity to experience these innovative projects first-hand, and share their experiences with their Dutch counterparts.

Richard Bacon MP, Chair of the All Party Parliamentary Group on Self-Build, Custom and Community Housebuilding and Placemaking and Ambassador for the Task Force said:

“The Netherlands is one of Europe’s trailblazers for Self-build and Custom housebuilding. I am delighted to have the opportunity to compare notes with the Dutch authorities, who are keen to learn about our Self-build legislation, the Self-Build and Custom Housebuilding Act, which began life as my Private Member’s Bill.”

“Through our collaboration and the exchange of knowledge, we have strengthened each other’s practice, which helps ensure that Self- and Custom Build housing can live up to demand. After all, it is the people that make the towns.”

Mario Wolf, Director of the RTB Task Force, said “I am delighted that we have been given the opportunity to share our experiences with the Netherlands and benefit from their successes. Knowledge sharing and development of best practice is central to our work, which is what this conference is all about.

“This visit is enabling us to gain valuable intelligence from the Dutch experience of enabling more Custom and Self Build housing – to understand what works and the pitfalls we should avoid.

“It will enable us to pass on first-hand experience to the organisations we are supporting and share opportunities for innovation and housing market diversification with our colleagues and Ministers in the Ministry for Housing, Communities and Local Government. This includes any learning we can pass on to inform the Independent review to tackle barriers to building currently being carried out by Sir Oliver Letwin and his team for the Government.”

More details of the event can be found here.