The Government has announced the first 14 garden villages across the country which collectively could deliver more than 48,000 homes. Garden Villages are distinct new settlements, each with between 1,500 and 10,000 homes and their own community facilities.

Government is making available £6m in project support funding to local authorities over the next two years, with a further £1.4m being provided for the delivery of new towns. Each location will be able to use the funding to unlock the full capacity of identified sites and bring in additional resources and expertise to accelerate development. Government will also provide support in terms of expertise, brokerage and offer of new planning freedoms.

The new Garden Villages include: Welborne near Fareham in Hampshire (see image above), Long Marston near Stratford-on-Avon, Oxfordshire Cotswold in West Oxfordshire, Deenethorpe in East Northants, Culm in Mid Devon, West Carclaze in Cornwall, Spitalgate Heath in South Kesteven, Lincolnshire, Bailrigg in Lancaster, St Cuthberts near Carlisle, and Cumbria and North Cheshire in Cheshire East. Some can be expected to start construction next year and more locations may be announced later in 2017. 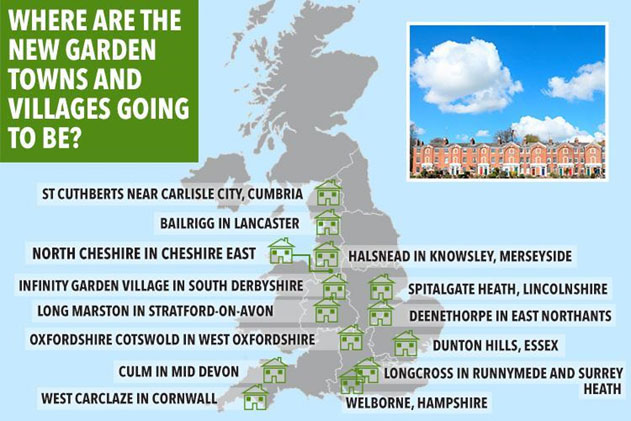 Three new Garden Towns have also been announced near Aylesbury, Taunton and Harlow & Gilston, and collectively these should deliver about 50,000 homes.

Garden Cities, Towns and Villages can provide significant opportunities for self-build and custom housebuilding as the diverse nature of this form of housing and its associated benefits aligns well with their planning principles. Opportunities can be identified if councils engage early on with custom build developers and enablers to help identify suitable parcels of land that can be brought forward for different types of self and custom build housing. This can include the construction of shell or package homes and permissioned serviced building plots which people can buy at affordable prices to help get construction underway quickly.

The majority of the new Villages are expected to include opportunities for self and custom housebuilding as they are implemented. NaCSBA plans to engage with councils at the earliest opportunity to provide support and advice to help bring these opportunities forward.